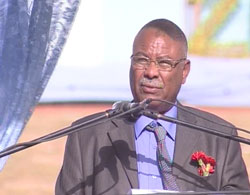 The 20th anniversary of Independence Day was celebrated in Mendefera town at the regional level in a colorful manner.

Mendefera, 22 May 2010 – The 20th anniversary of Independence Day was today celebrated in Mendefera town at the regional level in a colorful manner.

The celebrations that began in the morning hours featured a 2-hour long carnival show in which 12 sub-zones participated. The show, which was opened by the Administrator of the Southern region, Mr. Mustafa Nurhussein as well as  Minister Woldemichael Gebremariam,  featured displays portraying social services, agricultural and industrial products, sports activities  of the region among others.

The carnival show attracted broad acclaim on the part of the spectators.

Also in the afternoon hours, an official ceremony was conducted in Mendefera in which ministers, army commanders , government officials, as well as thousands of nationals participated. The celebrations were transmitted live through ERI-TV.

Speaking on the occasion, the Administrator of the Southern region, Mr. Mustafa Nurhusein, stated that this year’s Independence Day celebration is quite special as it is a time in which we renew our pledge for strong unity and at a time when the national development drive is gaining momentum.

Speaking on behalf of the National Holidays Coordinating Committee of the Southern Region, Ambassador Suleiman Haj said that extensive preparations have been underway since May 1 to celebrate the occasion in a colorful manner.

Various programs, including songs, as well as dramas and calisthenics involving numerous students were staged on the occasion.