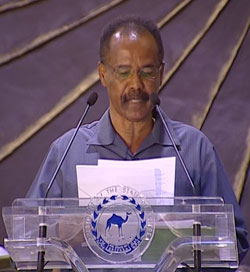 Click Read More to read President Isaias Afwerki’s full speech on the occassion of the 20th Anniversary of Independence Day, May 24, 2011. Dear compatriots inside the country and abroad
Distinguished guests and participants
Ladies and Gentlemen

May I extend my congratulations to the entire Eritrean people on the occasion of the 20th anniversary of Independence Day!

Expressing my gratification at the successful journey we have  traversed, I would like to thank all those who made remarkable contributions to imbue our Independence Day celebrations the splendor that it deserves. My heartfelt appreciation also goes to Eritrean artists and friends who made creative and innovative contribution and especially those nationals from the Diaspora who came to the Homeland to add colour to the celebrations.

Freedom is nurtured through a dynamic process.   It is akin to the glamours and permanent home that one builds when allotted land, and whose legacy never fades but is ever reinvigorated.    Freedom is indeed an impenetrable fortress founded on reliable socio-economic transformation and cultural resurgence.

Freedom is not acquired through benevolence and submission or pleading.   It is a pursuit that one nurtures through hard toil; not that one is handed over on a silver platter.

Freedom is a precious public good achieved through heavy price and sacrifice, and, that has to be maintained through persistent care. It is indeed a glorious bequest of the broad masses. It is precisely for such an enduring legacy that the Eritrean people waged a bitter struggle. The successful campaign that the entire Eritrean people carried out in unison over the past 20 years was aimed at putting in place a strong foundation for genuine freedom.

As it may be noted, the symposiums conducted in the past few weeks were vital both in offering us a glimpse of what has been accomplished in the last twenty years and as benchmarks for objective appraisal of our activities.   However, we need to undertake a more profound review of our assessments in order to map out appropriate, forward-looking action programmes that would enhance the effective implementation of our pronounced objectives and goals.  In this spirit and without delving into details, I would like to highlight the following salient points to underscore and project the development framework that we seek to pursue in the period ahead:

And in regard to all the aforementioned domains, it is imperative that the following work programs should be given due consideration:

Although we do not claim to have fully accomplished the task of laying the foundations of a sovereign and free Eritrea, it is nonetheless indisputable that we have managed to achieve far-reaching victory considering the time and challenges encountered, as well as the limited resources at our disposal.  Provided we continue our forward march with added fervor and enthusiasm, as well as the rich experience we have so far acquired, it is not difficult to discern that we would be in a position to accomplish still more gratifying outcome in the years ahead.

The greater portion of the past 20 years witnessed a wave of conspiracies against us. It is an open secret that the forces of domination and monopoly that surfaced in the wake of the end of the Cold War and the emergence of the so-called ‘New World Order’, which coincided with the achievement of our Independence, have been engaged in spawning numerous obstacles in the past twenty years by fomenting [perennial crisis to roll back the bright prospects ushered in our region.

One of the main manifestations of these impediments is the continued occupation of our sovereign territories for the past nine years by the surrogate TPLF regime.   This act has occurred in flagrant breach of the final and binding arbitral Award and in contravention of international law through the direct intervention of the US Administration in order to create chronic instability.  The various ploys that were unleashed in the past nine years to derail the judicial process and nullify or render the Award meaningless are fresh in the memories of all those who have been following the events closely.   And if they have failed invariably, it is because we were not deceived from the outset.

The numerous military, economic, political and diplomatic acts perpetrated against us to divert our attention and dampen our resolve remain imprinted in our collective memory.   These unremitting  hostilities and acts of subversion have not however kept us hostage.  Our defiance and the implementation of our development programmes have continued without let up aggravating, by the hour, the frustration of our adversaries.

As I described in detail on the occasion of last year’s Independence Day celebrations, US State Department officials have leveled unfounded accusations against Eritrea towards the end of 2009, on 23 December during the Christmas week, to impose unlawful sanctions on the country under the rubric of the UN Security Council.   This act was partially prompted by the desire to push the Eritrea-Ethiopia boundary issue to the back burner and to silence us.  At the same time, it reflected their desire to make Eritrea a scapegoat for the debacle they have created in Somalia in 20 years of ill-advised intervention.  A putative and fabricated border dispute between Eritrea and Djibouti was further invoked to demonize and indict Eritrea for acts of regional destabilization for which they bear primary responsibility.  Indeed, the instabilities they have spawned in the Horn of Africa either directly or through proxies, their footprint in all these crises, is too evident to be erased through sheer manipulations.

As we celebrate the 20th anniversary of Independence Day, it is quite in order to underline that nobody stands to be misled by the cheap propaganda ploys employed by the aforementioned quarters that have been engaging in persistent futile attempts to derail us from the border issue. Moreover, our staunch resistance to continued military and economic conspiracy, and the fact that our people’s forward march to a bright future remains on course, coupled with our robust national resolve, would certainly deal a stunning blow to any and all enemy conspiracies designed to derail us from the border issue through engaging in meaningless diversionary squabbles.

If the issues of Somalia, terrorism, piracy, as well as acts of subversion and instability in the Horn region etc. are matters of concern to the Security Council, then each and every issue should be examined thoroughly and seriously by an independent and impartial body in a transparent manner.   They should not be intermingled and lumped together in order to sow confusion.   The findings should be adjudicated in an independent body that has the requisite jurisdiction and in which truth would not be compromised.  By the same token, if the Security Council maintains that it has moral and legal obligation to look into these matters, it should not accommodate the whims and deceitful accusations of those bent on trampling justice.  The Security Council must address and bring to an end the occupation of our sovereign territories for the past nine years in violation of the rule of law.  Indeed, after repetitive deceits, it is too late in the day for anyone to be hoodwinked by the lies of “weapons of mass destruction”.

Calling on the Eritrean people inside the country and abroad to further reinforce their relentless efforts towards the attainment of still much more gratifying outcome, I would like to extend sincere appreciation to members of the Defense Force, Administrations, Ministries, the PFDJ and Associations for honoring their pledge short of obtaining due reward.

Once again my congratulations to all nationals and wish you all a promising rainy season!

Glory to our Martyrs!
Victory to the Masses!