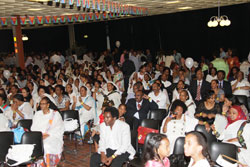 Eritrean citizens living in the Netherlands celebrated the 20th anniversary of Independence with patriotic zeal.

Asmara, 25 May 2011 – Eritrean citizens living in the Netherlands celebrated the 20th anniversary of Independence with patriotic zeal.

In the celebrations in which nationals from various Dutch cities and foreign friends of Eritrea took part, different artistic and cultural shows, as well as programs directed to children and youths featured. The Chairman of the preparatory committee, Mr. Girmai Tesfai, stated that this year’s Independence Day is special as it is being marked at a time when the Eritrean people waged integrated rebuff against the unjust sanctions resolution, while at the same time registering impressive development achievements.

Also speaking on the occasion, the Eritrean Ambassador to the EU, Mr. Mohammed Suleiman, indicated that the people and Government of Eritrea have managed to register major development progress in the face of waves of hostilities.