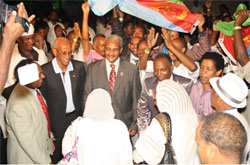 Speaking at the celebrations held in Tel’aviv city, Ambassador Tesfamariam Tekeste pointed out that May 24 occupies special place in the heart of every national. He further explained that such a great Day is not celebrated for mere enjoyment, but rather it is an occasion in which thorough assessment is made as regards achievements and shortcomings.

Ambassador Tesfamariam also outlined the tasks accomplished over the past 20 years as regards improving the people’s standard of living, safeguarding the nation’s sovereignty and ensuring economic emancipation.
Also on the occasion, individuals who make utmost contribution in community activities were awarded prizes.