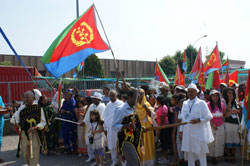 Eritrean citizens living in Milan, Italy, celebrated the 20th anniversary of Independence Day in a colorful manner under the theme: “Perfect Harmony for National Dignity”.

Asmara, 27 May 2011 – Eritrean citizens living in Milan, Italy, celebrated the 20th anniversary of Independence Day in a colorful manner under the theme: “Perfect Harmony for National Dignity”.

In the celebrations in which Eritreans and foreign friends of Eritrea participated, the Eritrean Ambassador to Italy, Mr. Zemede Tekle, stated that the Eritrean people are standing on a promising stage through rebuffing multiple acts of hostility. In this connection, he indicated that major tasks were undertaken over the past 20 years that lay solid ground for building a prosperous nation.

Mr. Zemede further explained that the Eritrean people are exerting maximum efforts for the success of the national development drive, and that the Eritrean government continues to play modest role towards ensuring regional peace.

Meanwhile, a drama prepared by Eritrean youths in Milan was staged on the occasion highlighting the history and heroism of the EPLF fighters. Prizes were also awarded to those teams that demonstrated excellence in the sports competition, while renowned signers and musicians staged musical performances, thus adding color to the event.