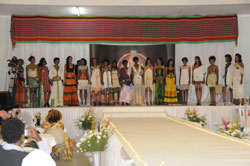 The atrocities and brutal crimes committed against Eritreans in the halls makes the expo grounds as one of the worst prisons of the country. Residents of country used to mention the name of this place with great fear and terror in their voices but today they name the place as one of the country’s merry and cheerful places. Thanks to our martyrs who made the liberation of the country possible: the expo grounds are recognized for being the place where a number of national celebrations are held. In the days where Eritrea was preparing to celebrate the 20th anniversary of its liberation, Expo was also preparing to host an event first of its kind. In the evening of May 21, one of the halls of the expo grounds, G-3 was decorated in traditional Nara designs and the hall was filled with nationals from both the country and Diaspora present to mark this event.

Arriving at the entrance of the hall one can witness the pictures of young ladies hanging in the walls of the G-3 Hall. Ladies that has won various medals back in the 1960s, looking at those pictures able one guess what this event was all about- a beauty contest. Although there have been several occasions where a “beauty contest” has been held in the country, what makes this contest different besides being first of its kind is almost all the participants are ladies that have been born after the independence or ladies that has been too young to remember the days of colonization.

After the guests and the judges got to their respected positions and the introductions were made, a fashion show held by children was the first part of the contest.  The children preformed their show dressing in the traditional dresses of the nine ethnic groups. After songs where presented by the invited singers, the beautiful ladies that has been chosen to be the top 18 performed their show dressing various fashionable dresses.

All are beautiful, their dresses, hairstyle and makeup make you stare at each and every one of those 18 beautiful young ladies, and wonder how the judges would be able to choose from 18 beautiful ladies.  After an interval of two songs, again come ladies of the night each walking and smiling to the crowd believing that she can be the first “Miss Independence” of the country.

After the ladies finished their second round of their shows, songs and a musical comedy was presented by two artists appreciating the beauty of the Eritrean ladies and emphasizing that not only looks matter as females of the country has proven in numerous occasion – starting from the struggle to liberation, war for preserving sovereignty of the country and their huge endeavors in the development campaigns of the country.

After the ladies present their final performance dressing in various fashionable gowns, the final part of the contest took part where every girl is asked a question regarding to their respected background, academic achievements, professional accomplishment, hobbies etc. Although the ladies where from different background and their answers was quite different, each one answers the question in confident with short and precise answers.

The event was concluded with the crowing of Yordanos Lulu to be the first “Miss Independence” of the country.

On the events held as part of the 20th anniversary of independence, expo grounds held an event that marks the day memorable, and appreciate the outcome of freedom as the most hideous prison of the country decades ago held such a beautiful event.