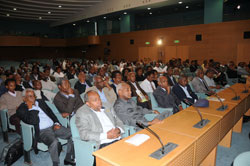 The national symposiums of the ministries and regional administrations which had been underway for the last three months were concluded with the symposium of the Ministry of Foreign Affairs. The symposiums held in connection with the preparation to celebrate the Independence Day of anniversary were conducted under theme “Eritrea – 20 Years of Dignity”. Looking back to the work accomplished over the past 20 years have vital significance to assess the attained staged and map out future plans for more gratifying outcome. In general, the past 20 years could be described as period of laying basic foundation for all-round development progress.

The final symposium of Foreign Affairs was held at Asmara Palace from May 16 to 17. The participation of a number of Eritrean nationals residing abroad who came to celebration of Independence Day had made the session unique.

Addressing to the symposium, the Minister of Foreign Affairs, Mr. Osman Saleh, noted that the foreign policy of the Ministry emanates from Eritrea’s vision to live in peace and harmony with its neighbors, contribute towards regional and international peace, security and development according to its capacity and be a respected member of the international community.  He went to say that the idea is founded on ensuing independent political path to secure healthy regional and international relations as well as tranquility, stability and cooperation.

The Ministry’s accomplished programs and on-going activities are not merely restricted to political and diplomatic activities , but it has been coordinating its efforts with all concerned Government institutions and PFDJ organization as it embraces economic, cultural, scientific and other sphere.

The Ministry has been endeavoring to establish strong cooperative relations with neighboring countries in one hand and internationals on the other hand in the past 20 years. It has also strived to enhance economic cooperation, strengthen partnership, promote investment and trade ventures and other development activities with all countries.

Ambassador Mahmoud Ali Hirruy, presented a paper on Eritrean efforts to develop healthy relations with regional countries and organizations. Despite persistent  challenges and oppositions conspired by the interference of external forces, he said that Eritrea has been striving towards establishing strong cooperation with neighboring countries, ensure these countries internal stability, encourage investment, besides fostering trade relations.

Emphasizing the importance of the neighboring countries’ peace and stability, Ambassador Mahmoud, said that Eritrea has made vigorous endeavors to resolve conflicts encouraged with neighboring countries through peaceful and legal ways.  He further explained Eritrean relations with the regional organizations African Union, IGAD and Arab League. As a consequence, economic cooperation has been fostered with all neighboring countries on the lofty principle of mutual interest and partnership.

In spite of major challenges and hostile conspiracies, commendable achievements have been registered in the past 20 years. The established economic relations based on partnership with our region so as to enhance the country’s development amply demonstrate this fact. It also maintained independent and non-aligned foreign policy regardless of all pressures and hostilities weaved against the nation. In this respect, Eritrea has registered wide diplomatic relations in our region and the world at large.

The contribution of Eritrean nationals residing abroad could not be viewed lightly standing alongside their people and government policy. They have been actively participating in the political and socio-economic activities of the country in the post-independent years similar to the armed struggle period. Especially their role in foiling foreign conspires designed to underestimate Eritrea’s development progress by all means have been attested in number of events.  The recent demonstration to condemn the unjust sanction resolutions and their steadfastness in rebuff conspiracy could be cited as an example.  It is estimated that roughly around 500 to 750 thousand nationals live abroad.

As regarding to their paramount role, Ambassador Hana Simon presented a paper in the symposium. She said that the Ministry has worked to organize Eritreans in Diaspora in community-based organizations so as to ensure their rights and duties.  These organizations in collaboration with Eritrean diplomatic agencies have activating in preserving national unity and strengthen relations between the nationals and the Government. In addition to staging demonstrations, presenting petitions, posting articles on website aimed at disclosing defamation campaigns against Eritrea and reflecting Eritrea’s image, the Eritrean communities conduct meetings to follow-up the objective situation of their Homeland as well as donating money to support martyrs’ families, among others.

Following this, Ambassador Negasi Sengal presented a paper on human resource development, and he stated that intensive courses were provided to address shortage of manpower. The Ministry also opened educational opportunities to staff members at home and abroad up to M.A level in bit to strengthen the nation’s diplomatic relations at the regional and international level, he add.

In closing statement, Minister Osman underscored the importance of the papers presented in evaluating and documenting the history of diplomatic activities.

Well-Being of Society is a National Priority