Well-Being of Society is a National Priority 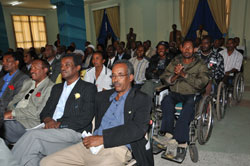 Many Eritrean families and individuals have been improving their quality of life through breaking dependency. Welfare programs of a variety of forms have been playing leading role in alleviating living standards of citizens. Such welfare programs are mainly directed in assisting individuals or  groups to become self-reliant, create a venue to employment through the provision of trainings, and in a more general sense to ensure societal stability through promoting the well-being of nationals with difficulties earning their living due to illness, disability, martyrdom of a family’s bread winner or elderliness.

Films projected in a three-day symposium of the Ministry of Labor and Human Welfare held from 12-14 of May 2011 at Expo Hall shade light to the participants on how people’s living standards has been changed for good through various schemes of assistance. In the symposium, people from all walks of life that include victims of war and people with inborn disabilities, benevolent nationals from abroad and inside the country, who have been active in supporting the disadvantaged members of the society through different forms of benefit schemes, and other concerned bodies, took part.

Since 1991, special attention has been paid towards addressing the aftereffects of war, which had left consequences on the socio-economic conditions of the Eritrean families. The Department of Social Affairs was setup in the viewpoint of the basic principle of ensuring social security. The development of communities’ capacity in implementing community-based rehabilitation program has also been taken into account.

Alleviating the socio-economic, psychological and securing the well-being of the families of the fallen heroes, who sacrificed their lives in the struggle for independence and safeguarding the nation, has been the utmost priority of the Department of Social Security and particularly of the unit for the well-being of the Martyr’s families.

Survivors benefit has been given to the families of martyrs – to their parents, wives or else to their children under the age of 30. The Ministry of Labor and Human Welfare have been working in collaboration with National Insurance Company of Eritrea in paying the survivors benefit throughout the country by opening branch offices in each of the six regions or through mobile teams that travel to the remote parts of the country. From January 2004 to December 2010, 2.1 billion Nakfa was paid to the families of the fallen heroes.

Improving and sustaining the quality of martyrs families lives, promoting respect, protecting  and giving additional assistance to the very venerable have  been of a major concern. In line with this, a number of benevolent national inside the country and particularly in the abroad have been taking initiatives to pay special tribute to the martyrs through assisting their families. Eritreans in the abroad have contributed around 13 million Nakfa for such benefit schemes.

Future pans of the Ministry as regards to the families of the fallen heroes is that to conduct extensive researches on their living conditions so as to assist them in a way they could become self-sustaining nationals.

Protecting the rights of children and disabled people and advocating for such rights provided that they might be violated, solving socio-economic disadvantages among the vulnerable citizens through community-based rehabilitation programs have been the principal objective of the Social Welfare Department.

Bearing in mind that socialization of children is a necessity requisite to nurturing responsible citizens; varied foster care projects have also been implemented under the umbrella of their relatives or through adoption programs. In this regard, around 160 children have been nurtured thorough adoption and 24 children have been given to families who volunteered to give foster care. Through forming group homes, so far, around 300 children in 24 groups of families have been under close care. Since 1991, around 850 orphanages have also been nurtured in Asmara Orphanage.

In the last twenty years of independence, with around 393 million Nakfa around 71, 221 orphanages have been rehabilitated to 27,780 families. Such a rehabilitation program have been making due contribution in enhancing family and community-based nurturing of children, solving economic problems of the orphanages, and securing their healthcare and educational expenses. Disadvantaged families who have become beneficiaries of financial assistance have been sending their children to schools, and trainings have been offered to a number of children to make them self-sustaining, which in turn contributed a grate deal in changing their life style.

A number of people have been volunteered to work in community-based rehabilitation programs. Active engagement of such people have been imperative in providing  information that could help families and individuals find the resources they need to live healthier, happier lives; as well as offering valuable information to help them in their day to day activities. Physical, educational, social, economic rehabilitations have been implemented to meet the envisaged goal of assisting people with disabilities.

Besides helping the disabled people to become economically active citizens through  offering interest-free loans, employment opportunities has also opened in varied work areas. As part of the physical rehabilitation programs, varied Medicare services have been also provided. Through out the country, around 38,000 people have become beneficiaries of prosthetic limbs that are worth of around 38 million Nakfa.

Each of the war-disabled heroes in the Denden Camp has monthly been receiving 1,800 Nakfa, while monthly monetary assistance have been given to each of the  disabled fighters in the six regions. Besides, their family members have been beneficiaries of free medical care.

As highlighted in the symposium, Eritrea became member of international labor organization in 1993. It has then been working to ensure that workers rights and solidarity are respected. The Labor Department at the Ministry of Labor and Human Welfare have been working to pave a smooth work atmosphere between the employees and employers based on the principle of creating constructive relations between the two parties. Workers are also having freedom to establish associations.   The issuing of a gender-neutral salary regulation is also a remarkable achievement in women’s rights.

Ensuring social security has been a national priority. Eritrea’s pension rights proclamation issued in 2003 indicates that 65 to be a retirement age, however, taking into account the health condition of the employee. This proclamation is a very comprehensive one that it takes into consideration the time spent for rendering any public service as full occupational time. Such a proclamation also gives the right to the transfer of pension rights to the legitimate successors.