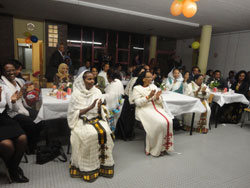 Eritrean citizens residing in Egypt celebrated the 20th anniversary of Independence Day with patriotic spirit in the presence of representatives of Egyptian political parties, Egyptian intellectuals and media representatives.

Speaking on the occasion, the Eritrean Ambassador to Egypt, Mr. Osman Mohammed Omar, gave briefings on the development achievements registered since independence. He underscored that enemy acts of conspiracy and ploys weaved to kneel down the nation have been foiled through the integrated rebuff of the people and Government of Eritrea.

Also on the occasion, Dr. Ibrahim Nesredin, a lecturer in Cairo University, noted that the Eritrean Revolution emerged victorious through defeating the colonial forces that were fully backed by the western and eastern major powers. In this regard, he said that the unparalleled role and participation of women in Eritrea is beyond comparison to counterparts elsewhere in the world.

Meanwhile, a representative of the Egyptian Higher Military Council came in the person to the Eritrean Embassy and delivered a message of congratulations from  the Chairman of the Council, Marshal Mohammed Husein Tentawi, to President Isaias Afwerki.

In a related report, Eritrean nationals living in Kenya colorfully celebrated Independence Day. The Eritrean Ambassador to Kenya, Mr. Beyene Russom, explained that the Government has been playing modest role since independence to promote peace and stability in the region.

Likewise, members of the Eritrean community in the Belgian city of Brussels celebrated the 20th anniversary of Independence Day with patriotic zeal. The Eritrean Ambassador to the EU and Belgium, Mr. Mohammed Suleiman, stated that the Eritrean people are enhancing development endeavors through rebuffing enemy acts of hostility and conspiracy. He further urged nationals to avail themselves of the available trade and investment opportunities in the Homeland.

Also in similar celebrations in Toronto, Canada, the head of public and community affairs, Mr. Semere Gebremariam, pointed out that the colorful celebrations of Independence Day on the part of Eritrean citizens at home and abroad is a manifestation of the long struggle waged involving heavy sacrifices.

Various cultural and sports programs, as well as exhibitions and others featured in the celebrations which were attended by diplomats and foreign friends of Eritrea.

General Public Called Upon To Help The Disabled Become Productive