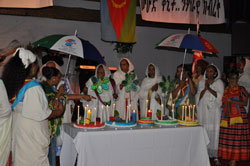 Eritrean citizens living in various US cities celebrated the 20th anniversary of Independence Day in a colorful manner under the theme: “Perfect Harmony for National Dignity.”

Asmara, 4 June 2011 – Eritrean citizens living in various US cities celebrated the 20th anniversary of Independence Day in a colorful manner under the theme: “Perfect Harmony for National Dignity.”

In the celebrations held in Oakland, Los Angeles, Orange and Riverside cities, the nationals reiterated readiness to strengthen the integrated national rebuff.

Likewise, Eritrean citizens residing in Qatar celebrated the great Day in patriotic spirit in the presence of Foreign Minister Osman Saleh, and the Head of Political Affairs at the PFDJ, Mr. Yemane Gebreab, as well as a number of foreign friends of Eritrea and journalists.

Speaking on the occasion, Ambassador Ali Ibrahim Ahmed called on Eritrean nationals in the Diaspora to reinforce national unity and enhance contribution in rebuffing enemy acts of conspiracy and hostility.

The Chairman of the Eritrean Community in Qatar on his part lauded the implementation of multifaceted development programs in the Homeland, and asserted that members of the Community would continue to stand alongside the people and the Government of Eritrea.

The participants of the celebrations voiced determination to live up to the nation’s expectations.