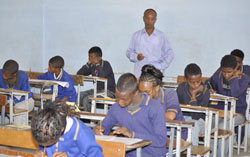 This year’s National Grade 8 Exams has begun today across the nation and Saudi Arabia in 284 testing centers.

Asmara, 8 June 2011 – This year’s National Grade 8 Exams has begun today across the nation and Saudi Arabia in 284 testing centers.

The head of national examinations department in the Ministry of Education, Mr. Mesfn Tecle, indicated that about 55,764 students, out of whom 24,000 are females, are participating in the examination being given.Noting that the number of participants has increased by 15% compared to the previous year, he explained that the construction of new schools this year through the coordinated endeavors of the Government and partners played significant role in increasing the number of participants in the examination.

The exams are being given in 4 subjects, namely English language, social science, mathematics and science. Out of the total of 321 schools, 282 are government-owned schools, while 19 are non-governmental and 20 Defense Force and extension schools.

About 247 students of international schools of the Eritrean community in Jeddah and Riyadh that pursue the Eritrean curriculum are also taking part in the exams.