Honoring the Fallen Heroes through Assisting their Families 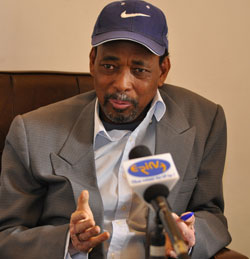 The Government shoulders the responsibility of caring the families of the fallen heroes who gave their lives for the national cause. Equally significant, nationals inside the country and abroad have also been contributing a quite appreciable share in providing survivors benefit scheme through a five-hundred Nakfa monthly payment.

In the wake of independence, when the country’s economic situation was at shambles,the government issued a proclamation in 1994 that aimed at assisting the Martyrs’ families. Adhering to its political commitment of assisting the families of the fallen heroes the Government also issued a revised proclamation in 2003, which also aims for the introduction of a monthly payment of 500 Nakfa. Enabling the families of the fallen heroes to receive the monthly payment at ease has also been taken into account that branch offices have been opened in different localities.

The Ministry of Labor and Human Welfare has been engaged in organizing the benefit scheme, ensuring that the payment is conducted effectively, while the payment has been the responsibility of Eritrea’s National Insurance Company (NICE).

According to Mr. Zeray Tekleab, Director of Martyrs Families Security Affairs at the Ministry of Labor, 320 Million of Nakfa has been annually dispensed since 2004 to assisting the families of the fallen heroes.

Though the nationals in the abroad took initiatives to assist the families of the fallen heroes for a period of two years, many of them have also promised to give lifetime assistance. Besides providing educational materials, garments and other items, these nationals have since 2004 offered around 130 million Nakfa monetary assistance.

Individuals inside the country and abroad have not been limited to assisting single families but they have rather been supporting up to 20 families. Of the around 1400 families that have been identified to be at a vulnerable stage, more than 10,000 have been receiving the benefit schemes from nationals in the abroad.

Inhabitants of Teseney sub-Zone have taken exemplary initiatives to assist families with children below the age of 18. Hence, 208 families have been rehabilitated in varied work areas of their choice. A monetary assistance of 5,700 Nakfa was also given to each family with children below the age of 18 that came from Southern and Anseba regions and rehabilitated in the Teseney Sub-zone. Not confined in what they have accomplished so far, the inhabitants of Teseney Sub-zone have collected above 2 million and 150,000 Nakfa for the same purpose.

Likewise, in the Central Region above 5 million Nakfa have been offered to supporting the families of the fallen heroes. Benevolent individuals who desired to support anonymously have been also contributing a grater share in such benefit schemes. Mr. Zeray cited as an instance of an individual who have so far contributed more than 205,000 Nakfa and assisting 12 families.

Mr.Zery also pointed out that a total of above two billon and 360 million have been dispensed in assisting the families of the fallen heroes in the period between 2004 and 2011.

Many individuals, communities, and associations have also been contributing to the account of Martyrs trust fund. So far, around 72 million Nakfa has been deposited.

Living standards of many families have been substantially changed through the rehabilitation programs so far conducted through out the country.

Besides, annually commemorating 20th June-Martyrs Day the Government and nationals inside the country and abroad have been renewing their pledge to martyrs trust through an act of pragmatism.