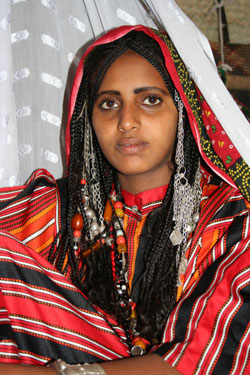 As every society follows different practices in treating pregnant women, the rituals practiced in delivering the baby and treating the mother and the child also vary. Majority of the practices involve assisting the mother have an easy delivery and protecting the baby from any kind of harm. As time for delivering the baby approaches, female relatives and neighbors of the pregnant woman will gather in her house and pray for the mother to have an uncomplicated delivery. The women also light fire to make the house warm, and call for a mid-wife.  They also make the pregnant woman hold a rosary of St.Mary, this is also done simply due to the belief the society has that the mother having the rosary can have a safe delivery.

The female relatives gathered in the house slaughter a sheep or chicken after rounding the animal three times above the head of the pregnant woman in labor.  If an animal to be slaughtered is not available in such situation the women in the house will bake bread, circle it three times over the head of the pregnant woman and slice it, finally the bread is eaten by the children around the house. There is also times where the female relatives bring flour with them and prepare a porridge, “geát herhuro” and eat it while the woman is still in labor.

In times when the pregnant woman is in heavy labor, the women in the house will make her drink water used to wash her husband’s feet, according to the belief of the society: if a child drinks water used to wash his father’s feet, the child can be delivered easily. A sheikh is also called to pray for the woman and read “Kitab Alka’a” from the holy Quran, they will also prepare a traditional steam bath called “Tish” for the mother and others will massage the navel of the mother with butter. They even slaughter a goat as an offering to the mother.

Similarly in the Tigrinya ethnic group pregnant women get a special treatment and care. Although the treatment various according to the place and the standard of living of the family:  the food prepared for  pregnant woman should have a balanced nutrient and the pregnant woman has the traditional steam bath, Tish continuously. The pregnant woman is also protected from doing house chores considered too tiring.
There are various practices frequented by the Tigrinya society to avoid miscarriage and protect the mother and the unborn child: those practices include attaching tail of gazelle, nail of a tiger, and bone of various animals on different parts of the mother’s body. In addition she will wash her body with holy water, apply butter to her hair frequently, and avoids social gatherings.

Once the time for delivering the baby arrives, usually at the beginning of the labor the mother will hear a loud noise like firing of a gun or any other loud noise which is believed to assist the mother in the delivery. A sheep is also tied at the headboard of the mother’s bed to make noises during the delivery. She will drink the juice of a flax seed. The juice of the flax seed needs to be hot.

Relatives who have the experience of delivering a baby gathered at the house of the pregnant woman will pray, and take the dress of the mother to church, undo her plaited hair, and she will have Tish.    All the task of delivering and nurturing the mother and the baby is done by those women.

Traditional practices of a society are not only practiced for the purpose of protecting the mother and the child but also as the identity and rituals that marks that particular society.

Ploys Against The Unity Of The Liberation Forces.