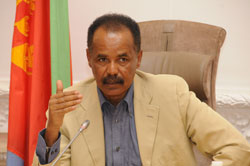 A meeting of the Eritrean Cabinet of Ministers got underway today at the Denden Hall here in the capital.

Asmara, 13 June 2011 -A meeting of the Eritrean Cabinet of Ministers got underway today at the Denden Hall here in the capital.

In the opening session, President Isaias Afwerki gave extensive briefings focusing on streamlining the next 5-year development policies, the objective political and security developments in the region and future prospects. He explained that the symposiums conducted by all ministries and administrative regions in connection with the 20th anniversary of Independence Day celebrations were quite significant in highlighting development accomplishments registered over the past 20 years. The President said that taking into account the present stage which the nation finds itself represents not only the 20th anniversary of Independence Day but also the opening of a new era, it is imperative to map out clear document of a 5-year development program sector by sector concerning future prospects. In this regard, he gave directives for ministries, administrations, all government institutions, the PFDJ and associations to present action plan in the coming six-months.

President Isaias underlined that the task of achieving food security still remains the priority in the national development strategy for the next 5-years. To this end, he stressed the need for ensuring sustainable growth of food security programs on concrete yardstick, boosting agro-industrial products in both quality and quantity for exports, beyond meeting domestic food demand. He further noted the need for mapping out the necessary plans towards promoting effective land, water and environmental management, forestry, soil and water conservation, as well as preserving marine resources and environmental rehabilitation.

Pointing out that tackling housing problem ranks top in the 5-year action program, the President emphasized the need for effective implementation of housing projects within the set timetable.

Regarding social services, he underscored that emphasis should be laid on the task of expanding land, sea and air transport, enhancing improved health service in all parts of the country, in addition to gearing educational opportunity to the training of youths equipped with the required skill, thus opening up more employment opportunities. As regards the financial sector, he stated that making the necessary review of the existing policies is imperative so as to conform to the new strategy, besides developing information system and dissemination capacity in the contemporary period, he added.

President Isaias went on to say that despite the multifaceted acts of conspiracy aimed at impeding the nation’s development drive, the Eritrean people,  nonetheless, continued their  integrated rebuff with added strength, while at the same time the national development endeavors continued to gain momentum.  In this connection, he noted the need for reinforcing political, media and diplomatic work alongside development endeavors.

As regards the issue of the British nationals who were detained in Eritrea, the President recalled that the Government refrained from delving into diplomatic propaganda, press and PR campaigns, thus handling the matter with utmost prudence and patience. He further pointed out that the Eritrean government has pardoned the criminals and set them free after conducting the necessary investigation and confirming their criminal deeds with concrete evidence.

Following the President’s extensive briefings, the Cabinet of Ministers held in-depth deliberations on drawing up the document of development program for the next 5 years and other topics.
Proceeding to the next agenda, the Ministerial Cabinet conducted discussion on   the accomplishments made in the agriculture sector and approved action programs for the coming six months and beyond focusing on developing livestock resources, improving seeds and the distribution of modern fertilizers, as well as soil and water conservation and community-based forestation programs, among others. Moreover, it reviewed work accomplishments in the domain of fisheries resources. In this respect, the Cabinet of Ministers took note of the tasks undertaken to boost fish products along with putting in place the required operational facilities, in addition to expanding salt works. It also approved future work program in the sector.

On the energy and mines sector, the Cabinet of Ministers assessed the tasks carried out in installing electricity service in both rural and urban areas over the past six months. It also took note of the products obtained in the mining sector over the past six months, in addition to the ongoing mining exploration activities in various corners of the country, among others. In this regard, the Cabinet mapped out future action programs.

Concerning accomplishments in public works, the Ministerial Cabinet reviewed the implementation of various projects in the construction of roads and water storage facilities. It also approved action programs dealing with the reactivation of housing construction projects, construction and repair of roads and the like.

The Ministerial Cabinet meeting continued in the evening hours.

Eritrea’s Independence Is The Outcome Of Steadfastness And Heroic Exploits In Nacfa Front: Veterans