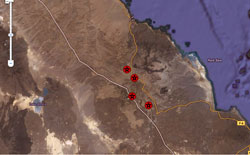 Reports indicated that the eruption that took place in 4 different areas around Afambo, Nebro and Sireru causing a 5.7 rector scale earth tremor.

The ensuing dust is covering hundreds of kilometers in the area, and that the quake has been heard in the greater portion of the region as a whole, according to reports.

The Southern regional Administration disclosed that the Government has moved the inhabitants in the area to a safe place, in addition to providing them with the necessary care. No damage has so far been inflicted to human life , the Administration added.

Although similar earthquake incidents were witnessed from time to time in previous years, yesterday’s tremor was of higher scale that led to volcanic eruption.