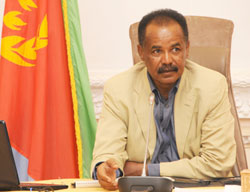 A meeting of regional administrators was conducted today at the Denden Hall.

Asmara, 15 June 2011- A meeting of regional administrators was conducted today at the Denden Hall.

In the meeting which focused on the development programs of 2011, the regional administrators made extensive presentations as regards developmental programs and activities underway.

As regards the agricultural programs presentation that was based on the expected level of harvest and demand, an understanding was reached for further extensive work in soil and water conservation efforts since it is a critical factor for the efforts to ensure food security by boosting cultivation as well as promoting animal resources.

The administrator went on to point out that repairing water catchments would constitute a priority in the agricultural programs for the year 2011 and emphasized that all the regions need to work on this endeavor as a permanent and at the same time progressive task.

Indicating that land structure needs to be changed, it was stated that the ongoing water catchments constructions should be reinforced and also numerous accomplishments have been registered to-date in line with the 5-years plan,  in the frontier of soil and water conservation endeavors, the construction of water reservoirs, reforestation as well as boosting underground water holding capacity.

Stating that although their effects can only be seen in the long run, President Isaias explained that forestation programs and enclosing of forest areas can play an important role in bringing about climatic changes and strengthening water sources. The President then reminded that similar efforts need to be exerted with goals that go beyond forestation.

The administrators conducted in-depth discussions, following presentations made by each region.

In a concluding statement, President Isaias pointed out the importance of closely monitoring each region’s development programs through the use of the information centers so as to critically evaluate the strengths and improve their organization.

President Isaias, who has said on the occasion that development belongs to the people, reminded each region to involve their respective inhabitants in the ongoing development programs.