Nakfa: Symbol of endurance bracing itself for Martyrs’ Day Commemoration 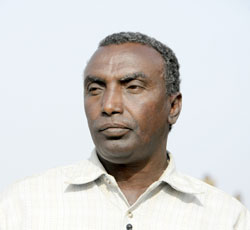 Only couple of days are left for Eritrean nationals to commemorate this year’s Martyrs Day on June 20th. Nationals from all over the country and abroad come together in one spirit to pay homage to the sacrifice made by these gallant fighters. For those veteran fighters, the occasion would stir of losing compatriots. While for others, it would be an event to honor the selfless act of their beloved brothers and sisters and tell the story of those compatriots to young generation. Eritrean martyrs are not only remembered in this specific Day dedicated in their honor, but they are living monuments in the heart of every Eritrean.

As it has been announced, the town of Nakfa is selected to host the official Martyrs Day commemoration at national level. The commemoration of June 20 in this historical place by itself conveys special message. After the strategic withdrawal back to 1978s, Nakfa, once freed by EPLF has never fallen to the Derg regime. Rather it became a stronghold for the EPLF to thwart the massive enemy forces equipped with superior firepower and backed by the Soviet Union. Of course, foiling these offensives for almost 10 years had solicited the lives of many young precious nationals.

Every valley, mountain, spot and elongated fronts of Nakfa embraces untold history of the armed struggle journey and the heavy sacrifices made. Nakfa is a symbol of Eritrean steadfastness and prove the inevitability of independence from shackles of colonialism once for all.

The Administrator of Nakfa town, Mr. Idris Ali Shiker, explained the significance of commemorating of Martyrs Day in the historical town. “Right from the achievement of independence, the Government and people of Eritrea has been making relentless effort to preserving the long stretched trenches and historical events of armed struggle. In the recent regional assessment meeting hold, we have identified the need to exert utmost efforts to cherish ancient and recent historical artifacts dispersed in the region. We had discussed the existing scattered skeletons, trenches and building martyr’s monument and ways of enhancing preservation methods.”

A plan was designed to conduct studies where these freedom fighters fall from February 2011. The task of collecting the remains of the fallen heroes along the 80Km-long front trenches stretching from Sewaras to Menda’at has been undertaken efficiently. Its final goal is to lay the skeletons of the martyrs in their eternal site of honor. “In the excavation process of the remains of martyrs, one can observe the varied background of the late fighters buried in same hole. This proved the strong unity among the freedom fighters and their firm stands alongside the leadership for one purpose regardless of their difference,” Mr. Idris elaborated.

Besides, efforts are undergoing to maintain the 500 Km-long underground trenches extended from Qarura to Debesata. A 40-hectare reserve land has been designated for construction of terraces and planting trees to preserve its originality. Moreover, a dirt road around Denden area and inside the town has been renovated through dozers.

As regards to the participation of the local community, Mr. Idris lauded their active participation in collaboration with EDF members. “Committees are being set to accommodate pilgrims who came from different regions of the country as well as from abroad. Also, transport facilities are made available and that necessary reparation process have been carried out along the road from Keren-Nakfa and She’ib-Afabet.”

Planting tree seedlings in honor for the martyrs would also be part of the commemoration event as usually. “About 200 thousand tree seedlings are made ready in Laba and Bakla nursery to be planted in various areas of Nacka especially in the 40 hectares reserved area,” the administrator added.

“The work is in its initial stage and would continue in an intensive manner so as to preserve and make the site tourist destination in the future,” he added. “This significant day would be a stepping stone for the implementation of the outlined 5-year strategic plan of the region concerning the issue. The envisaged task is an attribution to honoring martyrs’ trust.”

One Good Turn Deserves Another In Return

“ We Used The Colors Of The Soil”