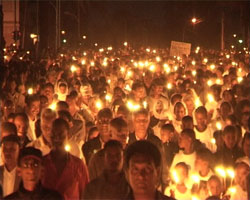 In the candlelight vigil held in Asmara city, tens of thousands of people from different administrative areas lighted candles and marched from City-Park to Bahti-Meskerm Square at 7 p.m. accompanied by marching band and held a prayer for their martyrs.

Speaking at the occasion, the head of Political Affairs of the PFDJ, Mr. Yemane Gebreab, said that Eritrea’s political independence and sovereignty is today an irrevocable reality owing to the bravery and sacrifice of its martyrs. He then called on every Eritrean to enhance contribution in implementing the ongoing development programs.

Ms. Genet Tewoldebrhan from the participants said that Eritrea pays due homage to martyrs, and that she’s proud that her son died for a just cause.

During the event, various artistic shows highlighting the heroic feats of Eritrean martyrs were staged.