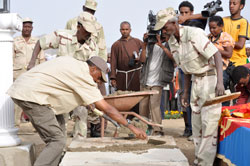 Martyrs Day was today commemorated in Nacfa town at the national level with patriotic spirit.

In the commemorative event that took place in Fidel “Pe” trench in which government officials and thousands of nationals participated, President Isaias Afwerki said that the unparalleled enthusiastic celebrations of the 20th anniversary of Independence Day marked a prelude to the commemoration of Martyrs Day in the historic town of Nakfa.

The President further noted that there are basic facts which remind all citizens that the annual commemoration of Martyrs Day is closely interlinked with Independence Day celebrations that include the need to ensure that the nation achieve continued all-round development and dynamism through hard work; in which citizens enjoy equal opportunities and rights as well as one where social justice prevails, among others. (For details, see full text of the President’s speech)

Speaking on the occasion, the Administrator of the Northern Red Sea region, Ms. Tsegereda Woldegergis, indicated that the commemoration of Martyrs Day in the historic town of Nacfa shoulders citizens heavy responsibility to reinforce commitment in honoring the trust of martyrs.

Skeletons of martyrs along the Nacfa Front that were collected by the people and members of the Defense Force were made to rest with high esteem in the Patriots Cemetery. President Isaias laid wreath at the cemetery, followed by the Head of Organizational Affairs at the PFDJ, Mr. Abdalla Jabir, Defense Minister Sebhat Ephrem, the Chairperson of NUEW, Ms. Leul Gebreab, and the Administrator of Northern Red Sea region, Ms. Tsegereda Woldegergis.

After planting a tree seedling, President Isaias, accompanied by senior officials and the general public, observed clothes and various tools used by the martyrs in their daily activities that were discovered along with the skeletons.

Various cultural programs featured on the occasion highlighting the steadfastness and dedication of the freedom fighters, as well as the participation of the people in the struggle.