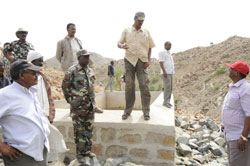 President Isaias Afwerki today conducted an inspection tour of development and agriculture infrastructure projects in Anseba region, as well as those envisaged for implementation.

Keren, June 21, 2011 – President Isaias Afwerki today conducted an inspection tour of development and agriculture infrastructure projects in Anseba region, as well as those envisaged for implementation.

In the course of the visit to Gizgiza dam, the President inspected the draft plan for the construction of the dam and was briefed on its water holding capacity.
President Isaias on the occasion pointed out the scarcity of underground water resources in the area and called for the proper utilization of the water reserved.
The president also conducted a tour of inspection in Situr Agricultural Project and observed the dairy cows found there. On the occasion, President Isaias called for the boosting of endeavors to increase the dairy cows population as it would contribute a great deal to ongoing food security initiatives.

On his visit to the Adi Hashel in Keren, President Isaias was briefed on ongoing master plan development over an area spanning 200 hectares. The President, said that due attention would be given on priority basis to the task of renovating roads in the area, and called on the population to take active participation in the endeavor.

The President also conducted similar visit to the Balwa dam, currently under construction. He was also briefed on progress so far registered. He also expressed words of encouragement to all those involved in the undertaking.

During the duration of his tour, the President exchanged views with experts and forwarded ideas on ways of speeding up the projects underway.