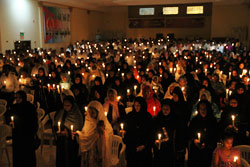 Eritrean citizens in Riyadh and its environs commemorated Martyrs Day with patriotic spirit on June 19.

During the commemorative event, the nationals pledged to assume the responsibility of assisting additional 58 families of fallen heroes and donated 22,637 Riyal Saudi towards augmenting the Martyrs Trust Fund. All in all, a total of 182,717 riyal was contributed in one evening to the same cause.

The Eritrean Ambassador to Saudi Arabia, Mr. Mohammed Omar Mahmoud, stated that the great Day represents an opportune moment not only to remember martyrs but also renew commitment in honoring the trust of martyrs. He further called on nationals to enhance support to families of fallen heroes.

Also speaking on the occasion, the head of consular affairs, Ms. Weini Gebregzabher, explained that Eritrean citizens in Riyadh and its environs donated over 6,520,000 Nakfa during the period 2003 to March 2011.

Accordingly, the Minister of Energy and Mines, Mr. Ahmed Haji Ali, handed certificates to those benevolent nationals who took the noble initiatives.

Voicing determination to honor the trust of martyrs, members of NUEW branch in Jeddah contributed 3,230 Riyal to the Martyrs Trust Fund.