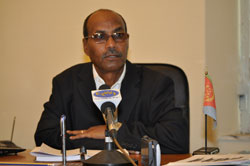 This year’s Eritrea festival at the national level would be held from July 22 to 31, according to the National Holiday Coordinating Committee.

Asmara, 23 June 2011 – This year’s Eritrea festival at the national level would be held from July 22 to 31, according to the National Holiday Coordinating Committee.
The manager of the office of the Committee, Mr. Tesfai Berhe, noted that the Festival reflects the nation’s unity, ethnic diversity, its rich natural resources, the potential of innovation and creative skills of citizens and the like. He added that the necessary efforts are being made to make this year’s festival effectively reflect these national assets.
Mr. Tesfai indicated that the programs include, the staging of village pavilions of all the Administrative regions, educational pavilion featuring the on-going efforts to extend equitable educational opportunities  across the country and the achievements registered to this end, as well as the lifestyle of the Eritrean people.
According to the Committee, various awards would be made given to  winners in traditional sports competitions, top 10 songs, poems, books, films and dramas, among others. Mr. Tesfai also stated that business enterprises would provide service at fair price.
He further explained that Eritrean nationals from abroad are expected to actively participate in the festival.