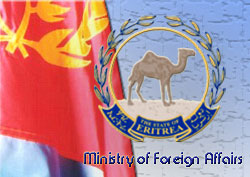 One As Four – Four As One

At a time when it has become phenomenal that “the accuser, witness, judge and prosecutor…is one”, the ongoing fabrications of discredit is limitless.
One As Four – Four As One

At a time when it has become phenomenal that “the accuser, witness, judge and prosecutor…is one”, the ongoing fabrications of discredit is limitless.

In a speech he delivered on the occasion of the official celebration of the 19th anniversary of Independence Day, H.E. President Isaias Afwerki underlined salient points as regards the so-called “sanctions” in the following manner:

”The issue basically lacks any legality and is essentially designed to cover up other main and fundamental issues, and thereby diverting matters to meaningless direction through derailing the appropriate path.  As such, the people and Government of Eritrea dealt resolute rebuff both in letter and spirit to the conspiracy. On top of that, we have officially challenged the Security Council as regards: 1. What the accusation leveled against us is all about? 2. Who the accuser or accusers are? 3. Who the arbitrator or judge is? What about its legal authority and methodology? 4. Why our right to self-defense has not been respected? 5. Irrespective of the accusation, its authors and their excuses, our right to self-defense in an independent and just forum should be respected so as to ensure our determination to deal with the issue on the basis of facts, legality and justice. And this because we are well aware of the fact that there exists no accusation based on legal ground, but rather a mere political gimmick deliberately resorted to on the eve of specific holidays.”

The current game plan involving the hectic resort to fabrication of discredit in the name of the so-called ‘Monitoring Group’ is essentially designed to cook up a litany of lies with a view to influencing the Security Council adopt a resolution. However, as indicated in the preface of the report by the so-called ‘Monitoring Group’, claiming that it has compiled sufficient data following extensive investigation from ‘independent sources’, is but a ruse in an attempt to present lie as truth.

As has already been laid bare, the party that is compiling the ‘accusation’ is but one clique. By the same token, the one filing the ‘accusation’ is also one clique. Likewise, the one posing as the ‘judge’ is also the same clique. And even the ‘prosecutor’ itself is the same clique. Despite the fact that the actors in this clique are many, Joey Hood is one among them. This individual is a CIA officer who entertains blind hatred against the people and Government of Eritrea. But who is Joey Hood? What about his personal background or the different guises– both formal and cover-ups – employed before and at present? What about his relations, be it personal or official, with the ‘Monitoring Group’?

Joey Hood, who is senior advisor in the US State Department as regards issues concerning Eritrea and Afghanistan, is also commissioner of the clandestine “Commission for East Africa”. In addition, he is senior advisor to the so-called ‘Monitoring Group’ that is engaged in compiling baseless data against Eritrea. What’s more, Joey Hood is actively involved in various CIA-operated covert operations. The same individual also committed numerous acts of hostility against the people and Government of Eritrea under the cover of “political officer” in the US Embassy in Asmara during the period 2002-2004. In the following period, he worked in the US embassies in Yemen and later on Qatar. He is one of the key architects of Washington’s anti-Eritrea policy. Furthermore, as an individual who maintains close personal relations with the chairman of the so-called ‘Monitoring Group’ assigned to compile utter lies against Eritrea, Joey Hood continued his campaign of engaging in countless hostile activities against the hospitable people and Government of Eritrea both personally and covertly.

As has been amply elucidated a year ago, the questions that need to be addressed to the Security Council are indeed many. What really is the accusation, its essence and contents? Who is/are the accusers? Who is/are the judges? What about the prosecutor? And why are hectic attempts being made in advance on the part of the clique to create obstacles for Eritrea to prevent it from challenging lies and proclaim the truth as well as defend itself?  What about the timing of the ongoing maneuvers? …The questions are endless.

It is indisputable that any nation or people that uphold the supremacy of law and justice can by no means endorse an accusation that is totally based on utter lies and acts of discredit; neither can an accusation that has nothing to do with Eritrea whatsoever, or so-called evidence put forth by false witnesses, or a judge who passes ruling through pressure and intimidation have any legitimacy at all. Hence, the necessary groundwork should be laid so as to not only ensure that truth prevails but also hold aggressors and perpetrators of deceit accountable.

A moment with a war disabled football player