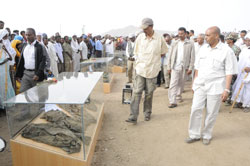 Demolished tanks, Urals, personnel carriers and other military vehicles that are remnants of the fierce battle for independence are still scattered all the way to Nakfa depicting the unyielding spirits of the freedom fighters who competed against the hugely armed Ethiopian regime. Shrapnel scattered throughout Nakfa trenches are also portrayals of the shelling that were showered over the foxholes of the EPLF forces in an attempt of destroying them. Axiomatic expression of the late patriot Mrs. Zeyneb Yasin “Even the Stones are Burning” highly reflects the bitter and trying struggle which transcends the limits of human endurance.  Such an expression gave rise to a book written by Roy Pateman. Such a beyond compare martyrdom that was paid for the national cause has been commemorated every year on June 20.

This year’s martyrs’ day was commemorated at a national level in Nakfa, which is a place of resilience in the history of Eritrea’s struggle for independence. As part of the lengthy struggle, Nakfa holds a hard to believe events and stories. Fighters wounded in the battle did not wait until their injury healed for they were overpowered by the urge to fight against the enemy. Tattered clothes disinterred along with the skeletons of the martyrs and other items displayed in an exhibition during the official commemoratory event were among the very touching ones.

A number of people from different areas of the country and from the abroad visited Nakfa to commemorate the Memorial Day. In the candle vigil that was lit on the evening hours of 19 June at Fidel Pe –a T shaped underground trench named after a Tigrinya latter, a veteran fighter Sium Weldemariam ( Gripi)  describes  Nakfa, the Freedom fighters and the EPLF as Matter, motion and energy which are inseparable constituents and yet complement for the advances in the military operations.

Trenches of Nakfa such as Volleyball, Harena, Rigole, Fernelo, Wantcha, Denden, Merkebna, Taba Selam and Taba Mekete among others are named after the events of military operations; some of them reflecting the very

closeness of the EPLF’ s and the enemy’s trenches as well as to the very fierceness of the battles.

Brigadier General Teklemichael Habtu, also gave briefings about the trenches of Nakfa and the futile attempt of the Dergu Regime to capture the very EPLF’s haven.

In that evening A documentary film-“The besiege of Nakfa” also projected at the Hall of Nakfa School of Social Science which highlighted the encirclement of the enemy forces in Nakfa and the sacrifices paid, the steadfastness of the people of Nakfa and the migration of Eritreans caused by  the prolonged war.

Some of the visitors traveled on foot to commemorate 20th June from different parts of the country such as from Serha, Mendefera, Omhajer, and Asmara enjoying the utmost security along the way to the place of destination- Nakfa.

Martyrs day was then officially commemorated at Fidel “Pe” on 20th June in the presence of a multitude of people and government officials. There, poems were recited and drams that reflect the steadfastness and dedication of the freedom fighters and the beyond compare sacrifices paid to free Eritrea from the clutches of colonialism.

Witnessing that nothing pays off to the cost of martyrdom that was paid for independence during the prolonged and bitter war, President Isaias Afewerki remarked that our martyrs are respected if only we fulfill our pledge to the martyrs trust. Ensuring all-round

national development and dynamism through hard work is the main fact that interlinks martyrdom and independence of a country. Thus, citizens enjoy equal opportunities and rights as well the social justice, in a view that the nation belongs to all and the dear martyrs laid down their lives for the dignity of all.

“It is the supreme duty of all citizens not only to keep aloft the memory of the martyrs but also erect lasting monuments and works of art in their honor,” the president underscored, “It is equally worth noting that beyond colorful observances of Martyrs Day, we should exert unremitting endeavors t transform Nakfa into the true capital of our martyrs.”

As part of the commemoratory event, a photograph exhibition of the ministry of Information that highlighted the hurdles surmounted all through to achieve independence stayed open for three days.

Victories of the Eritrean Struggle and Dominance of the National Force