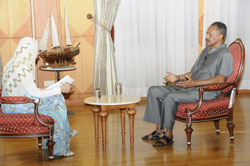 The interview focused on Eritrea’s journey for independence, its relations with neighboring countries and the region as a whole, the situation in Sudan and future prospects, the international community and its handling of issues, popular uprisings in the Middle East and North Africa and the interference of external forces, as well as the Nile waters issue and ways of resolving it. The President pointed out that within the past 20 years since independence, Eritrea has managed to lay solid ground in the domains of agriculture, infrastructure and basic services with a view to ensuring sustainable economic development. The exploration of natural resources and their proper management would also accelerate the pace of the nation’s development drive, he added.

President Isaias further explained that although the country could harness up to 120,000 tones of fish annually from its long coastline in the Red Sea, such a major resource was not, nonetheless, properly utilized over the past years. In this connection, he said that the attempts made in collaboration with Egypt to achieve the desired target did not succeed, and stressed the significance of fostering cooperation of partnership among Eritrea, Egypt, Saudi Arabia and other neighboring countries.

Replying to a questing regarding South Sudan, the President noted that over the past 20 years, Eritrea was working in consultation with the SPLM towards ensuring the right of the people of South Sudan to self-determination.

“We hope that the North of Sudan will become stable and remain united. Besides, good relations between the South and North serves the interest of both sides and neighboring countries as well,” President Isaias underlined.

Concerning his vision as regards the allocation of Nile waters and relations among the riparian states, he said that Nile waters are sufficient not only for the present but also future generations, and could have been a font for a paradise on earth rather than a source of tension and dispute. In this regard, the President noted the need for countries in the region to foster cooperation and economic integration through applying modern technological know-how.

Also in a reply he gave regarding the popular uprising witnessed in the Arab world and North Africa, President Isaias said that every country has its own reality, and what happened in Egypt was the culmination of decades of accumulated problems, including inequitable allocation of resources. Besides, there were regional and international dimensions that contributed to such a reality which eventually precipitated the explosion, he elaborated.