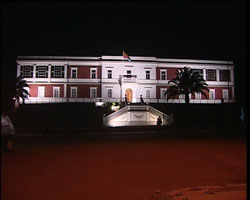 In a statement he gave to ERINA, the spokesman indicated that in continuation of the dissemination of pure lies, the so-called group has concocted baseless allegations claiming that ‘it has intercepted   a ship ordered by Eritrea to transport arms shipment worth over 20 million dollars from North Korea to Al-Shebab; it has seized a vehicle of the Eritrean Embassy in Kenya while transporting military hardware to Al-Shebab.’ In this connection, he explained that such an act of mockery constitutes an insult to the intelligence of the world public, and as such has no acceptance at all.

The spokesman further noted that although various gimmicks were applied to disseminate such lies with intensity in media outlets, no media organization gave any coverage to the allegations. In this regard, he stressed the need for verifying the source and intention of such ‘information’, as well as ‘evidence’ and ‘footages’ before disseminating these kinds of sheer lies.  In this respect, the spokesman recalled the unfounded lies alleging that ‘Eritrea deployed 2,000 soldiers in Somalia; a plane loaded with arms arrived in Mogadishu…’ that were in due course laid bare.

Noting that the so-called monitoring group is but an illegal entity which is engaged in gathering concocted lies in a bid to justify its vicious acts,  the spokesman called on the party that instructed the ‘group’ to demonstrate courage about justice and appear in front of a free and legal forum  face to face with the ‘accuser’ and the accused, instead of fabricating utter lies.

In this regard, the Foreign Ministry spokesman made reference to President Isaias Afwerki’s speech on the occasion of the 20th anniversary of Independence Day:

“As we celebrate the 20th anniversary of Independence Day, it is quite in order to underline that nobody stands to be misled by the cheap propaganda ploys employed by the aforementioned quarters that have been engaging in persistent futile attempts to derail us from the border issue. Moreover, our staunch resistance to continued military and economic conspiracy, and the fact that our people’s forward march to a bright future remains on course, coupled with our robust national resolve, would certainly deal a stunning blow to any and all enemy conspiracies designed to derail us from the border issue through engaging in meaningless diversionary squabbles.

If the issues of Somalia, terrorism, piracy, as well as acts of subversion and instability in the Horn region etc. are matters of concern to the Security Council, then each and every issue should be examined thoroughly and seriously by an independent and impartial body in a transparent manner.   They should not be intermingled and lumped together in order to sow confusion.   The findings should be adjudicated in an independent body that has the requisite jurisdiction and in which truth would not be compromised.  By the same token, if the Security Council maintains that it has moral and legal obligation to look into these matters, it should not accommodate the whims and deceitful accusations of those bent on trampling justice.  The Security Council must address and bring to an end the occupation of our sovereign territories for the past nine years in violation of the rule of law.  Indeed, after repetitive deceits, it is too late in the day for anyone to be hoodwinked by the lies of “weapons of mass destruction”.

In this regard, the spokesman underscored that the secrete documents being recently leaked by Wikileaks fully attest to the statements of the Eritrean government both in letter and spirit.

The US representative in Eritrea was quoted as saying: “Our anti-Eritrea statement concerning Somalia is not becoming acceptable. Some western Ambassadors have even tried to bring to my attention the assumption that it has no truth. Hence, we should try to employ other means like spreading allegations using hired individuals. However, if we failed to succeed, and if it is exposed that Eritrea has become a victim, Isaias [he did not even refer to him as President] would enjoy even more popular support and Eritreans would remain united under their flag and Isaias. And this would pose us obstacle.”

These are some of the documents leaked recently by Wikileaks.

Scheme Issued By US Representative In Eritrea Reflects Daydream Of The Administration: Eritrean Nationals