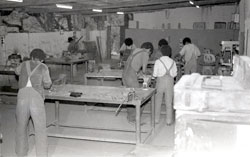 Through cultivating the faculty of imagination one could visualize future developments and the precautions to be taken through transcending time. Noticing the given minimal possibilities and taking initiatives even in the hardest times through pragmatic approaches, hard to believe wonders were came into being at the times of the struggle for independence. Empowering the human power amid the trying war was integral to EPLF’s principle of self-reliance in every aspect of the socio-economic, political, and educational as well as in the day-to-day activities.

Thus, in the view of fulfilling the basic necessities of the freedom fighters as well as for the people who were situated in the liberated areas, and more significantly taking into consideration that foundations should be laid to meet the demands of such human power in the post independence period, Wina Technical School (WTS) was set up at the strongholds of the EPLF in the times prior to independence.

Though the EPLF was engaged in literacy programs and promoting vocational courses among the people in the liberated areas as well as offering such courses to the freedom fighters, such engagement was not satisfactory that the need for the establishment of a technical school was conceived. Then a strategic plan for setting up a school that offers theoretical and practical courses was issued in 1984 which faced vivid deficits of curriculum, educational equipment, teachers and a safe place for practical implementation of the set out plan. Since having such a technical school was a necessity requisite to meeting the current challenges of the EPLF as well as cultivating a skilled human power that would serve the Sovereign Eritrea, the school became functional with the limited resources of equipment and 25 teachers who had varied levels of competence.

Overcoming vivid and any sort of unforeseen challenges Wina Technical School was then established in 1985 in Arag and began its operations with 83 students of whom the 44 were females. As the sustainability of the school was influenced by the then military operations, the school was resituated to Etaro. Following which, as war was relatively settled, the school was again relocated to a place known as Ketan (Mi’iraf) which is 22 km away from the main trenches. Through active engagement of the students and freedom fighters: classrooms, workshops, libraries, and dormitories of teachers and students were established.

Not knowing who would survive to see independent Eritrea, the freedom fighters were confident enough that Eritrea will be freed and that the country would need skilled professionals who would take part in construction activities. Prior to independence,  asked what her future plans are, a former student of Wina Technical school once said, “I will serve my nation” with great confidence and enthusiasm.Wina Technical School then graduated its first batch in 1988 in the presence of families, the school community as well as cadres of EPLF. Graduates of this school deployed in different units of the EPLF played a major role in varied areas of works and these students are still contributing their share in the post independence period. The long term plan of the EPLF, as mentioned earlier was to nurture nationals who would play significant role in the reconstruction of a nation that was devastated by the prolonged war. Besides this, however, the war for independence also claimed the lives of many professionals thus the trained youth were shouldering the responsibility of substituting them.

Wina Technical School which became functional under tree shades with almost worn out equipment passed all through an uneven paths. In the view point of modern technology the school was lagging behind, but unmatched achievements were attained with equipment of poor qualities. Nevertheless, the school sets out to upgrading its capability with advanced technologies so as to meet the demands of the small scale plants that were flourishing in the EPLF’s haven.  Eritreans in the abroad also started to supply the school with some equipment in its later developments. Training students who could operate the newly introduced machines was also another area of the overall activities of the school.

A significant question that could be posed as regards the life style and daily activities of the school is that to what extent the school was influenced by the then harsh conditions. From the very conception of establishing the technical school, it was out lined to registering a 100% success despite the difficulties in the course of the daily activities. Teachers assigned there were doing their best for the success of the students as well as playing parenting role. Making the school self-sufficient in food provision was also central to improving the life style of the students. Hence, students were cultivating farming lands and taking part in the construction of additional houses when the need arises. Apart from this the EPLF was also supplying them food stuffs.

The school was striving to nurture very dynamic youths through surmounting any eventualities. Since, the courses offered in this school in the period prior to independence used to cover 80% practical and 20% theoretical, the competence of the students graduated from this technical school is highly satisfactory.  Wina Technical School continued its operations in Ketan for five years in the post independence period until 1996. The school was then resituated to Nakfa not far away from its original location. Since relocation of the school in an enhanced manner required huge investment, the establishment of a modern Wina was imple

mented in three phases.
The first phase of the construction that was sponsored by the PFDJ was implemented through Segen Construction Company. And the second phase, the ministry of education expanded the school facilities that were limited to three workshops through the construction of six additional workshops, a big water reservoir pool and bread baking facilities. Through the aforementioned developments, the school incepted its operations anew. However, plumbing, carpentry, and electricity workshops would be definitely become operational in the third phase of the development plan.

The expansion of Wina Technical School would definitely play a significant role to the country’s economy as well as adding momentum to Nakfa’s development. Nakfa which has recently commemorated Martyrs Day at a national level will now host the 25th anniversary of the establishment of Wina Technical School on July 2,2011. Witnessing bitter experiences of war and harboring stories of heroism of the struggle for independence, Nakfa will now tell stories of success in the nation’s construction. The event would definitely stir nostalgic feelings among the former students and teachers who would recall the hurdles they passed through and the sacrifices paid for independence and for the success of the school.