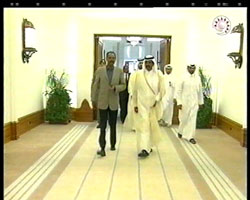 During his stay in Qatar, the President conducted extensive discussion with the Emir of Qatar, Sheik Hamed Bin Khalifa Al-Thaini, on bilateral, regional and international issues.

During the brotherly talks conducted in a spirit of understanding, the two leaders held in-depth discussion on diverse topics, especially regarding bilateral relations and future programs. Moreover, the two leaders exchanged views in detail on each program of all-round Eritrean-Qatari co-operation.

Meanwhile, in an interview he conducted with the Qatari newspaper, Al-Shereq, that was published on July 3, President Isaias pointed out that relations between Eritrea and Qatar is  strategic that continues to gain momentum with each passing day.

He further explained that there exist joint projects in the domains of agriculture, animal resource, mining, tourism and infrastructure. Some of the projects have already been implemented, while the remaining ones are in the process of implementation, the President added.

President Isaias lauded the vigorous endeavors being made by Qatar under the leadership of Sheik Hamed Bin Khalifa Al-Thaini towards promoting peace and stability in the Horn of Africa.

It is to be recalled that on arrival at Doha International Airport on June 30, President Isaias was accorded warm welcome by Sheik Hamed Bin Khalifa Al-Thaini and other Qatari government officials.

Officials visit nationals displaced due to earthquake and volcanic eruption