Eritreans In The Diaspora Call For Annulment Of Sanctions Resolution 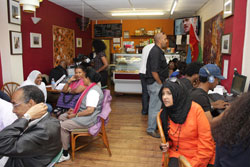 Eritreans in the Diaspora called for the annulment of the illegal and unjust sanctions resolution against Eritrea adopted in the name of the Security Council.

Asmara, 8 July 2011 – Eritreans in the Diaspora called for the annulment of the illegal and unjust sanctions resolution against Eritrea adopted in the name of the Security Council. Reports indicated that the nationals have sent more than 200,000 petitions through e-faces, emails and telephone calls to all members of the UN Security Council and the Foreign Ministries of their respective countries.

The worldwide campaign in which Eritrean nationals and friends of Eritrea took part was conducted from June 21 to July 6. At the end of the campaign, Action Days were also organized with a view to extending mobilization, raising the level of organization and harmonizing the efforts of Eritreans in Diaspora to continue the integrated national rebuff.

The nationals also called for putting an end to the continued illegal occupation of sovereign Eritrean territories in violation of the final and binding Eritrea-Ethiopia Boundary Commission (EEBC) ruling on boarder delimitation.
It is to be noted that the Eritrean nationals in the Diaspora have been holding meetings on reinforcing the integrated rebuff, peace demonstrations and making contributions in an expression of firm stand alongside their government and people. Meanwhile, they voiced determination to continue their campaign against the sanctions resolution.