Remarkable Efforts In Rehabilitating Displaced Nationals Due To Volcano 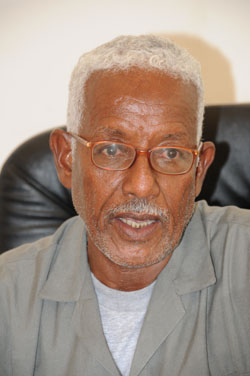 After a string of earthquakes, a volcanic eruption burst into life around Seriru in the extreme south of the Southern Red Sea region on June 12th and 14th. . Even though such seismic activity was occurring in the area in previous years, the recent quake was of higher scale that led to volcanic eruption. It was measured 5.7 rector scale and threw an ash cloud covering hundreds of kilometers and felt in greater portion of the region.  About 20 meters of land area previously covered by vegetation were destroyed and river beds were covered within 24 hours. In other places also, the lava has spread to about 4 Km. wide and soar 20 meters height. As a result, the inhabitants of the area were displaced and the landmass was changed. But thanks to the emergency relief aid by the Government and the people, the people obtained immediate support.  The Administrator of Southern Red Sea region, Mr. Ali Mohammed, gave briefings regarding the relief support being extended to the victims. Excerpts follow:

What can you tell us about the recent volcanic eruption incident?

This region is characterized as volcanic active area. One could easily observe the burned volcanic rocks on the way from Gelalo to Seriru. The recent incident happened at night in fertile area where the inhabitants herd their livestock and could probably have caused serious damage had it been burst during daylight. The intense eruption continued for several days and changed the landscape totally. Mountains were reduced to flat lands and plateaus were transformed to mountains.

Did the displaced nationals obtain relief supplies on time?

The necessary aid such as food, tents, blanket and potable water supply were made available within 24 hours. The general public and members of the Defense Force were immediately engaged in rescue efforts and the inhabitants were relocated to safe places. Emergency of volcanic eruption committee was formed from various ministries and other government agencies that inspect the victims need. Although the lave flow and melting rocks took many days to subdue, no human or livestock accident occurred. And until now no communicable disease have witness unlike other countries as a result of the coordinated rescue operation and rehabilitation scheme.

What would be the future prospects of these nationals?In line with the Government’s policy to improve the living standard of society, many villages have been regrouped in places where they can become beneficiaries of social services.  And now, we are planning to rehabilitate displaced inhabitants in places of their choice. So far many of them have opted to settle in the administrative areas of Alale and Wadie, South Denkalia sub-zone, as well as in the Afambo administrative area of Central Denkalia. The nationals were engaged in pastoral activities in semi-highland localities, but, the place is currently covered with melting rock. Hence they would be rehabilitated in sites where they can obtain access to education, health, potable water supply and related social services.

Any message you want to convey?
The support extended by the people and various organizations and zonal administration alongside the Government was very commendable and called on them to continue it furthermore.