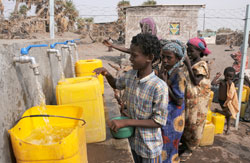 Southern Denaklia sub-zone covers the largest geographical area of the southern Red Sea Region. Despite its vastness, there was hardly any service rendering institutions. This time, however, as part of the nation’s engagement of implementing such services in most remote parts of the country, this sub-zone has also been gaining benefits of the varied facilities that are being provided to date.

In the last 20 years of independence the Government has given special focus to the provision of basic necessities and accordingly numerous projects that include water supply, education and healthcare services have been implemented which in turn enabled the inhabitants lead a better life. Speaking of the water provision, and bearing in mind that this areas is one of the most arid parts of the country, access to potable water was very limited that most localities were deprived of such a basic necessity. Hence, let alone to getting access of water supply that aimed at carrying out any developmental projects, the inhabitants of this sub-zone had a vivid deficit of potable water to sustain their life.

Concerted actions directed to solving the existed problems of water supply have borne fruitful out come and endeavors are underway to secure its sustainability in a number of places of this sub-zone.

Compared with the overall geographical coverage of the area, there was a huge gap between the demand and the access to educational facilities in the Southern Denkalia sub-zone. Nonetheless, educational access which was limited to two localities, now, though with different standards about 14 elementary schools have been offering educational services with the aim of achieving the guiding principle “Education for All”. Besides, three junior schools are also making due contribution to bring nationals to the platform of education. In connection with the ongoing advancements, there is a plan to open two new schools in two villages of this subzone.

Any sort of development carried out in this sub-zone is therefore registered from the ground zero. Though this accomplishment doesn’t fully meet the demands, a solid foundation has been laid to facilitate future undertakings.

Viewing the challenges encountered and particularly in the educational side of it, the inhabitants were just lagging behind; if not totally ignorant but with minimal knowledge of modern education. But this time, they are broadening their horizons of knowledge with the ever growing educational facilities. As adult education was introduced with a special focus to helping parents and to those who do not get the chan

ce to educate themselves, a dramatic change have been shown in the soft component of the people of this part of the country.

There is a huge gap between the earlier life style and the better livings standards registered along with the introduction of a number of service rendering institutions. Coming to the healthcare services, most of the people were dependent on traditional healing system in which its cons are vivid than its pros. Because of the realities that used to prevail everywhere in this respective area, a number of people were suffering from trivial diseases that could be cured through simple scientific approaches. With the implementation of advanced facilities every aspect of the people’s livelihood was changed for good. Since the people have been getting viable healthcare access at ease, behavioral changes that come along with such developments have been playing major roles in the reduction of maternal and child mortality rates.

Poorly sanitized water sources were also causes to poor health conditions for a number of people. Providing a secured potable water supply has then been one of the necessity requisite to promoting a healthy environment and a well protected society. Through the establishment of solar pumps potable water supply has been secured in most villages that are endowed with underground water resources.

Varied projects of water supply have solved the problems of a number of villages and particularly that of areas that stretch along the coastal lines such as from Rehayta to Beylul. Varied administrative areas that have become beneficiaries of solar and motor pumped water supply services include administrative areas of Rehayta, Abokilema, Harsile, Beylul, Berasole, and in Wade and Gahro. Other villages of this sub-zone in which deficits of water supply is prevalent, have been getting access through the construction of underground water reservoirs that could accommodate surface water sources.

Future plans of this sub-zone are to extend the scope and quality of the service rendering institutions. Hence, water supply projects implemented so far in Alale and Beylul would be extended from 4 to 6 stations. As regards educational facilities plans are charted out to open new schools that could offer services to the villages that have been resituated to a central place. “As part of enhancing the health facilities discussions have been under way to open a new hospital that could serve at a sub-zone level,” said Mr. Zeray Berhe, Administrator of Denkalia sub-zone. “The ultimate goal is to give balanced social services to all nationals throughout this area,” he added.

Implementing programs of vital importance in such an area which covers 45% of the overall area of the Southern Red Sea Region is indeed a very demanding task; however, the benefits that could be gained from such projects would contribute a redoubled outcome in changing the living standards of the inhabitants of this respective area. The Southern Denkalia sub-zone is divided into to 10 administrative areas that cover 38 villages and has around 20,000 inhabitants who earn their living as pastoralist, fisher men and some conducting trade activities.

Remarkable Efforts In Rehabilitating Displaced Nationals Due To Volcano