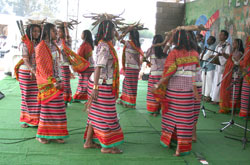 Culture is the system where certain societies shares various traditions, beliefs, values, customs, behaviors, and artifacts and transmit them to generations.

Raba’at is a traditional celebration practiced among the Maria and Beni-Amer tribes of the Tigre ethnic group. This holiday do not have a particular date but is mainly celebrated on the days following the EID which is a religious holiday. Members of the society agree on the date to hold the celebration and once the date is officially set, children of the society will begun to gather all the necessary materials for the celebration, and on the due date the parents will collect sugar and palm-date for the celebration. Then the children will celebrate Raba’at by eating, dancing and singing.

In celebrations held during such situations, members of the society will pray to face or overcome their troubles. The males in the society will gather around and slaughter animals while the women boil cereals inside the house but all will sing and pray the same song at the same time. There are also traditional rituals that are practiced without any celebrations; those celebrations include inauguration of a new building or house and marking of a female child reaching the age of adulthood. The latter tradition is mostly celebrated among the Tigre residing around Hirgigo.

There is also a traditional ritual celebrated among the Christian Mensa’a held during the days known as Pagumeé month. This month is the thirteenth month in the Geez Calendar: it is the month composed of the five extra days in the months having 31 days in the Julian calendar. During those celebrations no one is allowed to leave his/her home. The animals do not graze, butter is not reproduced from the milk,  and farmers do not go to their farming lands because it is believed that going to the farming land during those celebrations make the crops dry. Once the days of Pagumee are over the livestock will be washed with what the society believe to be a holy water.

The Mensaé Moslems also celebrate the day a child finishes his Kuran teachings and on this days gifts are endowed to both the child and his/her teacher as appreciation by the family of the child.

Despite the reason and the cause of traditional practices, traditional celebration are held among every society with great enthusiasm and believed to be part of the identity and culture of that particular society.