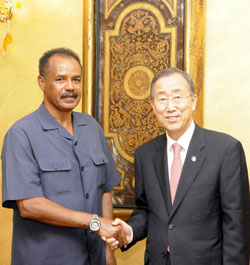 In the meeting characterized with a spirit of understanding, the President pointed out that Eritrea would continue its effort and modest role towards promoting development and cooperation in the Horn of Africa, in the conviction that peace and stability are of paramount importance to this end. In this regard, he called for the United Nations to make due contribution in this domain.

President Isaias further assured the UN Secretary General that Eritrea would continue its contribution and positive engagement for fostering peace and stability in the Horn region in general and in Sudan in particular.

Calling for the annulment of the illegal and unjust sanctions resolution against Eritrea adopted on December 2009, he further reminded that an Eritrean delegation should be given a chance to present Eritrea’s just case to the Security Council and challenge the parties that sponsored the resolution.  President Isaias also underlined that the necessary forum should be created in which the ‘accusers’ and Eritrean government representatives meet face to face.

Meanwhile, the President invited Mr. Ban Ki-moon to visit Eritrea so as to observe the objective situation from close quarters. Furthermore, President Isaias expressed readiness to visit the UN headquarters so as hold in-depth discuss on the issue.

Mr. Ban Ki-moon expressed appreciation to the role Eritrea plays in the Horn of Africa in general and the Sudan issue in particular, as well as the cooperation it has demonstrated to his special envoys on the issues just mentioned. He also noted the significance of Eritrea’s enhanced role towards promoting peace and stability in the Horn region, in addition to strengthening its partnership with the UN.

The Secretary General further stated that meeting he conducted with President Isaias is significant in strengthening cooperation of partnership between Eritrea and the United Nations. Mr. Ban Ki-moon also accepted the President’s invitation to visit Eritrea.