“When You Add On The Already Invented, Then You Are Above The Invention” Kibrom Ogbazghi 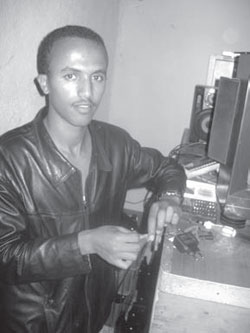 His  name is Kibrom Ogbazghi, after finishing secondary School he is one of the students that scored excellent marks in the Eritrean Secondary School Leaving Examination. In 2009, he joined the Eritrean Institue of Technology with the department of Electrical Engineering. In the past years Kibrom has invented various equipments, he has conducted an interview and excerpts follow: How were you introduced with the science of invention and fabrication?
It started when I was a 9th grader. I was working in an electric shop. I used to fix radios and other electrical devices. To enrich my electronics knowledge, I took some courses. With the support I was getting both from my parents and teachers I did my first invention which I call “the guard”.

It was a simple rug placed near the door. As one steps on it, it senses the weight difference and makes an alarm. With the encouragements and supports I was getting from my parents, I continued to work on further innovational activities and made a door that opens with a card. With this latter invention I participated in the nationwide competition organized by the NUEYS’s Innovation and Fabrication club, held during the Eritrean Festival but I didn’t succeed.In the following year I made an automatic condom selling machine that functions automatically. There are so many machines that are imported from China, but they all function manually. With that work I stood first at a national level. After that I fabricated milk churning machine, wireless house control device and modified a house control device.

What can you tell us about this latter device of yours?
Well, using a remote one can control the temperature, electricity and security of the house. Also, it can be used in opening and closing gates. Later I modified this device and prepared software for I even invented a wireless vacuum cleaner and college tea distribution machine. The wireless vacuum cleaner could be controlled from a distance of 20 meters. It is sort of a robot.

Have any of your inventions are used practically?
Not yet, the materials used in making the machines are very expensive. Thus, almost all of my works have not reached the stage where the public could use them in their day-to-day activity.  But in the demonstrations and shows held for my inventions, I have got good support from the public.

What were the inventions you presented in the show held few weeks back in the “Art Gallery”?
In the present show I presented a house controlling system using a Bluetooth. Nowadays, almost everyone uses cell phones. So I asked myself on what else could be done using our cell phones, apart from making and receiving calls. I decided to conduct a study on a cell phone and I picked up the blue tooth made the house control device for opening and closing doors in addition to controlling the house temperature and lightening of the house.

What could you say about the fabrication?
It is all about studying the material that has already been invented and see if you can add something of your own on it and that is fabrication. For instance if we take the Bluetooth, you need to study how it functions.  After through studies then you try your new techniques and see the outcome and if you success that is when you say I have fabricated this or that.

How many works have you done so far?
It is a lot. Sometimes I made 3 or 4major inventions a year along with other small inventions.

At the end what message do you want to convey to the readers?
Youth is the backbone of a nation. For me youth is someone who believes and works for a continuous development and change. If the youth is to think on the development of one nation then more effort has to be invested on the innovational and fabrication of materials. There are inventors by hobby, when education is added to the hobby; the outcome can be more encouraging. A nation can gain a lot from inventions and fabrications. Most of the times, nations import material that have been invented in other countries which requires a lot of hard currency. If the invention capacity of the youth in one nation is developed, then there will be no need to import materials from other countries. Thus I call on the youth to participate and boost their capacity in invention and fabrication.

The Prickly Fruit Of Summer