Eritrea would strive for promoting good-neighborliness and mutual respect in Horn of Africa: PFDJ official 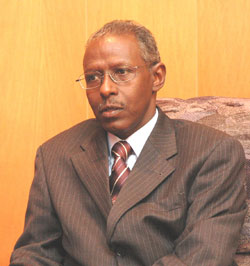 In meetings he conducted yesterday with representatives of the Security Council members in New York, Mr. Yemane explained that the primary stance of the Eritrean Government is that of ensuring the values and welfare of the Eritrean people. He further underscored that though the achievements the nation has scored in development endeavors is impressive, ensuring peace and stability in the Horn region and Ethiopia’s withdrawal from occupied sovereign Eritrean territories is of paramount importance.

Mr. Yemane also indicated that Eritrea has been exerting and continues to exert unremitting efforts to promote peace and security in the Horn region, including that of reinforcing stability in Sudan and seeking lasting solution to the Somalia issue. He further explained to the Security Council members the numerous conspiracies of enemy quarters to undermine the Eritrean initiatives.

Moreover, the PFDJ official pointed out that the obstacles made to prevent Eritrea from participating in regional and international forums, including Security Council meetings, the unjust sanctions resolution against Eritrea, as well as Washington’s complicity   with some regimes in the Horn region in weaving anti-Eritrea conspiracies could lead to further aggravation of the situation in the region.

Governments should not use the Nile River and its resources as a tool, President Isaias underscores

Central region: Extensive reforestation activities being carried out in all villages