Governments should not use the Nile River and its resources as a tool, President Isaias underscores 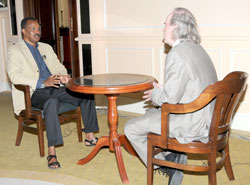 Asmara, 21 July 2011 – In an interview he conducted with NRK Norwegian Television, President Isaias Afwerki underlined that governments should not use the Nile River and its resources as a tool in view of the fact that the river and its resources are the assets of the present and future generations of the entire region.

The President called for a new approach that would ensure the common benefit of all on a lasting basis. He further noted that resort has been made to make the Nile issue assume political dimension, and thereby employed for propaganda and public relations gimmicks. As a result, President Isaias noted that the Nile Basin area got engulfed in further crisis and misunderstanding.

Despite the fact that 80-90 billion cubic meter of Nile waters flow along the territory of the Nile River apiarian states, the respective peoples have been exposed to drought, hunger and destitution, he elaborated. The President further explained that the people and Government of Eritrea only opted for observer role instead of getting involved in futile so-called discussions concerning the issue.

Replying to a question regarding Eritrea’s view about the program of utilizing the Nile resources on the part of Ethiopia, President Isaias said that regardless of the policy of governments, the Ethiopian people, just like any other people, are entitled to benefit from their resources. He explained that it is not new for the Eritrean people to support any program designed to promote Ethiopia’s development. In this respect, the President underlined that it remains the abiding political stance of the people and Government of Eritrea to witness peace in Ethiopia in which the people become beneficiaries of their natural resources.

Unlike the false claim of some quarters, he stated that the Eritrean people and their leadership don’t want to see any nation experience war due to the resources of the Nile River. In this connection, the President emphasized the need for all parties to work for the common welfare of the people of the region.

In a reply he gave to a question as to which party Eritrea supports, i.e. Sudan and Egypt or the seven riparian states of the Nile River, President Isaias said: “We have no reason to support this side or that simply because Eritrea does not believe there exists any reason for confrontation as regards the Nile issue.”

Likewise,   in a reply he gave concerning allegations that Eritrea is siding with Egypt as opposed to Ethiopia, the President declared: “The Eritrean people do not entertain ill-will against the Ethiopian people. We cannot take sides with Sudan or Egypt, and thus maintain an anti-Ethiopia stance because of the prevailing border conflict.”

Explaining on whether there exists an alternative solution in Eritrea’s view concerning the Nile River waters, President Isaias underlined the need for a new methodology as regards the current practice of looking at the issue as if Sudan and Egypt were the beneficiaries on the one hand and the rest as suppliers on the other. Moreover, he said that the establishment of an impartial group of experts that would undertake studies on effectively harnessing and administrating the resources of the Nile in the interest of both present and future generations could be the alternative.

In the meantime, the Nile Basin riparian states should refrain from resorting to misunderstanding and acts of inciting conflict, but rather hold consultations on promoting cooperation and joint development programs, President Isaias elucidated.

In conclusion, the President pointed out that the external forces and media outlets that have been engaging in acts of aggravating the issue should either make positive contribution through abandoning their hitherto negative attitude or else desist from interfering.

Eritrea would strive for promoting good-neighborliness and mutual respect in Horn of Africa: PFDJ official