Revival of the Eritrean Airlines 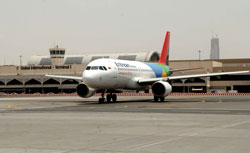 Eritrean airline has already begun its operation anew from 16 July 2011. Shabait has conducted a brief interview with Mr. Shakil Afab Kashmirwala, Chief Executive Office of the Eritrean Airlines as regards the re-launching of the Airline and prospects of future development. Excerpts follow:

The Eritrean Airlines has incepted its flight operations in a restructured manner, what are the major changes?

The major changes we have made when compared with the previous Eritrean Airlines is that there is a major shift in the business policy on top of implementing different business modules together. In the past, the Eritrean Airlines used to bank on third and fourth freedom traffic means. But now, there would be a round air traffic as opposed to the previous operation. We want to promote Asmara as a regional hub, and thereby make Eritrea the gateway to Africa.  If we look on Eritrea’s strategic location, the country has all the necessary ingredients to serve as a gateway to Africa.

We have also restructured the Airline that we have created new departments and divisions. We have revised the payment scales and we have also hired new staff and crew. The selection process was very tough that from the over 300 applicants, only 26 were selected and sent to Malaysia to be trained by Malaysian airline, which is one of the renowned airliners in the world. Besides, we have also introduced a new livery of Aircraft. Onboard services have thus been improved that a new configuration of the aircraft is now in place.

We will have business and economics classes that will have 50 and 34 inches seats respectively, which will make a very comfortable journey and help the airline, sustain the passengers. Moreover, we have gone for a much modern and recent aircraft–Airbus A320 to make the passengers feel comfortable flying with that. We have also opened our new world head quarter in Asmara. We are also switching a world class satellite communication which will make the communication system of the Eritrean Airlines very fast and efficient. Besides that, we have a major breakthrough that we are in the process of signing a contract with emirate airline that we are going to be switching to their revenue accounting system as well as their reservation system. Next two or three months we will see a major change in the Airline.

What benefits would the Eritrean passengers gain from this national Airline services?

We are going to have a direct service from Asmara to Lahore, Dubai, Cairo, Rome, Jeddah, and Khartoum. And definitely the Passengers are going to be benefited with the direct services and the flight price benefits for we have kept our operational cost low. They will also have more frequency of choices. We also intend to have an interline agreement with carriers like Emirates, Italia, Egypt air, and others. So, there will be better connectivity of Eritreans in Diaspora such as in Europe, Asia, Australia, and Americas and other places of destinations the airline is operating to. We will also have a local staff and that would be an added advantage to the Eritrean passengers in creating more comfort for onboard services.

What precautions have been taken as regards the safety, sustainability and competitiveness of this Airline?

Regarding the safety and sustainability of the Airline, we are starting off with a wet lease aircraft as we don’t have the complete facility at this point in time to maintain the Airbus A320. So, we have gone into an arrangement with another company who will do all the maintenance. They will ensure that there is an utmost dispatch liability.  At the same time, we are also negotiating with the major manufacturers and suppliers for developing the line maintenance facility for self-maintenance for all major checks. This is what we intend to do in terms of the safety. In terms of sustainability, we are coming up with a totally new product.

Inline, with the competition, we will offer more frequencies with lower operational cost in which the passenger will have much more financial benefits to fly with Eritrean Airlines. Competition is always a good gauge to see where you stand.  If you are not competitive in terms of pricing, services, dispatch reliability, and onboard services, which are all interwoven services, you are not competitive in all theses fronts and there is no way to survive. Besides the fair price, we will also offer for an extra luggage allowance, which we have already introduced. Our network will have uniform baggage policy. We will ensure that we are very competitive in terms of the pricing and in terms of overrates. On the cargo side, we will make sure that all the benefits of the baggage and refund policy pass on to the passengers.

Are there plans to start domestic flights, if so tell us about the flight routes that are to be introduced?

In line with the do

mestic flights, we have fleet of six Dornier aircrafts. We are actually trying to revive the fleet and make them air worthy. As soon as they are operational, we plan to introduce a domestic service probably a circle of flight that will take off from Asmara to Massawa and then to Assab. We will probably have a daily service because we are not mounting a very high capacity; so will offer passengers a choice between these three pints.

What experiences have been gained from its operations ?

A complete SWOT analysis of the last eight years was done. We looked at the strength, the weaknesses, the opportunities, and threats which would be faced in terms of the passengers, cargo, in terms of the operational capability and the route wise directional imbalances plus the operational limitations out of Asmara. All these were studied over the last one year. The new business plan is thus based on this analysis. What we are going towards is a very modern and efficient airline that should have self-sustainability. Of course, we will also generate a substantial amount of revenue for the country. We will be offering more employment to cope up with the extending network.

Could you also tell us about the future plans of this Airline?

The Eritrean airline plans to have its own modern fleet. Hence, we are looking at different option at this moment in time starting from the Airbus A320s to Airbus A330s. We are also evaluating the new 737s from the Boeing as well as we are looking at the wide body aircraft.

We will also build our own passenger terminal for there is a need to have a new passenger terminal to sustain the sixth freedom traffic and to make Eritrea a get way to Africa. Since the Government is exerting substantial support there would be very positive changes in the coming year. The Eritrean Airline also plans to build a new hanger for the maintenance facility which will most likely start with small capacity and then grow gradually. The target which we want to achieve is that we should become totally self-reliant on the maintenance aspect and thereby to carry out the complete Maintenance at the local basis.

As regards the extension of the existing network, we will start the flights to Lahore and Dubai four times a week, to Khartoum, Cairo and Rome twice a week, as well to Jeddah three times a week. Starting from October 2011, we will induct a second aircraft into our fleet. That aircraft will introduce services to Frankfurt, Nairobi, Johannesburg and we will mount more frequency on Jeddah and introduce a flight to Karachi that is besides Lagos. This is the new strategy, which we have adopted to ensure the sustainability in the Airline. Therefore, we are going with a very modern and fully efficient aircraft at a lowest operational cost at the same time expanding and addressing the needs of the passengers and the demand of the market.

If you have any last message you want to convey?

I am very much thankful for the Government, the Ministry of Transport and Communications and all authorities for their unprecedented support to the airline. We look forward to reactivating this airline and to serve the people and the government of Eritrea.

Culture: the Recipe for Existence and Civilization