Nine Nationalities with One Accord on Cloud Nine 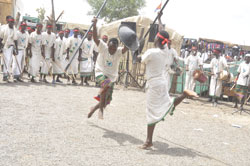 Drumbeats, blowing of horns, jingling sound of corks, the swinging of swords, the timing of dance steps, and the ululations invite one become part of the eagerly awaited festivity. Capturing each moment of the performances, one tires to learn the depth of the multifaceted shows of the nine ethnic groups that never let ones attention deviate. The national festival held every year in the summer time continues to be an ample gesture of reflecting the all-round make up of the Eritrean society—its diversity as well as the unison of its altruistic values. Needless to mention the varieties of the displays staged in different pavilions, the invention and innovation activities of the youths and much more.

Eritrea’s festival has become an event of a gathering to remember in which Eritreans from all walks of life as well as foreigners stay in a moment of utmost merriment. The Expo grounds continue to display a number of grabbing shows most notably the ethno-cultural diversity and the likeliness of the choreography among the nine ethnic groups in the aspect of dancing in circles. One who wants to learn the tradition has to travel to the Expo grounds. The cultural performances staged there are very narrative; holding themes of notable significance that are portrayals of the livelihood among the Eritrean societies.

In most of the cultural shows, though they paly their respective parts, males and females often dance together and sing in chorus with great passion. All the music performances are accompanied with solely traditional instruments that are rich in beats and uniquely identified for their originality. Listening to the music one could tell the beats of the ethnic group the music represents. In some cases, however, music styles are commonly shared among two or more ethnic groups.

Wosomya is played among the Hidareb and Tigre ethnic groups. The Hidareb, played this sort of music to express appreciation of heroism while the Tigre perform this show in marriage ceremonies.  Males and females of Tigre ethnic group perform this sort of music in groups while the females sing the males dance. Among the Hidareb, however, women take the lead in playing Wosomya in which they beat drums and sing to express admirations to the heroism, loyalty and victories won against any sort of invasion. These two ethnic groups also share the same traditional music instrument called Rebaba. Known as Kirar, this instrument is also common among the Tigrinya ethnic Group.

Bibob is also another sort of traditional play practiced in marriage ceremonies among the youths of the Hidareb. The youths engage in camel racing competition which is accompanied by the ululation of the women. The songs represent a number of themes such as love affairs, activities of the herdsmen, and other themes. The herdsmen sing and dance to express deep

appreciation to the significant role of camels in their daily activities.
The depth and intensity of the cultural performances that have been staged at the Expo grounds are very vast that could only give a glimpse of the cultural practices, the more one explores the more the findings would be.

The Bilen and Tigre similarly share Keskes and Guayla—Gualyla is nevertheless, common among the Tigrinya. The festival is therefore simultaneously reflecting the beauty in diversity and likeliness. Shelil is also renowned sort of play in which the women among the Tigre ethnic group convey messages of appreciation to men. Delarifoye and Erier traditional performance of the Bilen are played in the Easter time and in the summer respectively. Erier highlights the fertility of lands and the harvests attained following a benevolent rainy season.

A number of people have been flocking to the Expo grounds to take whatever cultural wealth they could get there. Representative dancers, singers and musicians from the nine ethnic groups are also playing with utmost passion to satisfy the eager visitors. Listening to the horn blown around the area of the regional villages, attracts a visitor to have a closer look of the cultural dances and varied beats that continued to fill the exciting atmosphere of the Expo grounds. Gila (horn) is a traditionally made music instrument of the Kunama and blown at the times of the passing of a senior person from that re

spective ethnic group. Besides, they use the Gila to call a gathering. Ekunda, Uleda, Andie-Kubula and Kawena are among the traditional music performances of the Kuama.  Uleda and Andie-Kubula describe the heroism and Ekunda is presented at times of mourning for a passing person and Kawena is danced with the accompaniment of claps at the times of happiness.

All the nine ethnic groups performing with in the premises of the Expo grounds are unfolding rich cultural heritage that sustained for centuries. The Rashayda play jumping and crossing swords, the Afar play in a way that reflects fishing activities holding curved dagger like blades and jump waving their hands, the Nara also play and sing swaying swords, the Saho holding spears and shields which is also common among the other ethnic groups and making beat guided jumps all of them portraying unity, steadfastness, and significant socio-cultural values of the Eritrean societies.

Apart from the cultural shows, a number of displays that represent a wide range of the activities of the six regions and branch offices of ministries and artistic works of individuals and associations, invention and innovation activities of the youths have been staged in the different pavilions at the Expo grounds. The National museum is displaying relics and recent findings of fossils, tools and utensils that were used centuries ago. Many industries have also been showing processed and semi-processed products.

The pavilions at the Expo are presenting varied displays. Learning through educational game and learning through interactive smart board has been a recently introduced method of teaching. Mr. Mogos Mihreteab from the resource center at the Ministry of Education’s branch office said that familiarizing student with smart boards, touch screen personal computers, digital libraries, and play stations that could educate and entertain them through educational games is the main objective of the displays staged in this pavilion.

Each year at the festival time, a number of youths have been coming with new innovations. Likewise, in this year, youths have presented their works to the visitors. The innovative  development in speech synthesis applications known as Eri-Lingual Solutions which recognizes local languages among others are epitomes of  youths engagement in finding solutions to a number of  shortcomings.
Festival Eritrea 2011 is therefore, becoming a perfect occasion for every one who desires to enjoy the enthralling cultural shows. It also becomes a platform for the getting together of nationals from different parts of the country and from the abroad in addition to being a good occasion for enhancing foreigners all-round knowledge about Eritrea.

Eritrea Is Not After Interests At The Expense Of People Of The Horn Region: PFDJ Official