Settling Dispute- The Unique Traditional Ritual of the Society (Part I) 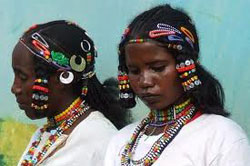 This article tries to view some of the traditional practices that are commonly practices among all the ethnic groups. The rituals and customs may vary but the overall effect and cause of the tradition is the same. As a result, almost in all ethnic groups disputes or quarrels among members of one society are solved through a peaceful agreement between the two parties.

In the Kunama ethnic group, the first step in settling a dispute between two parties especially if death is involved, the family of the killer will slaughter a red skinned lamp and gather the blood of the slaughtered animal in a bowl then the bowl will be given to one member of the “Sanga Nena”, family that settles the dispute. The member that has the responsibility will throw the bowl at the house of the family of the deceased in the middle of the night.

This blood throwing process is done with great care because if the family of the victim found the person throwing the blood, they might kill him in vengeance to their deceased family member. And in times where this member of the “Sanga Nena” is killed, then the matter is settled in vengeance and is not considered for another peaceful settlement. To prevent such acts of vengeance, members of the “Sanga Nena” will take almost all the sticks, sword and knives of the family of the deceased when they came to settle a dispute.

After the bowl with the blood of the animal reaches the house of the deceased, families of the victim will cry and grieve as they have heard the news for the first time. Especially the women in the family cry and wail.

In the following morning, the family of the victim will bury the blood in a bowl with a traditional ceremony and people will sit and grieve at the house of the deceased. The cattle endowed by the killer’s family will be hit by sword at the leg in this day in the present of the families and relatives of the victim. Then the cattle will be slaughtered to be eaten by all the people present for settling the dispute between the two parties.

Meanwhile the leader of “Sanga Nena” will take one part of the cattle and remove all the meat from the bone, and then he will dig a small hole and put the bone at the top of the hole. After that he will split the bone with a small stone into two and then remove the marrow and apply to the faces of elder uncles of both families. Then those uncles will touch each other with their chests. The stone is used to split the bones are used in such occasions only.

After the completion of those traditions the reward will be paid and “Bashala”, a traditional dish, will be prepared. “Bashala” will be mixed with water and will be served to the participants of the settlement of the dispute; members of the “Sanga Nena” also wash their mouths with “Bashala” after eating the dishes served on this agreement.

After that participants of the agreement will bless, pray and wish for the settlement to be the end of the dispute and that the two parties will be families from then onwards. The killer’s family prepares lots of Sewa, a traditional drink, and after the first of the peaceful settlement was ended participants of the tradition will go to the house of the killer and drink it.

These traditional rituals of settling a dispute continue to another stage once the feelings of vengeance and grieve are settled through the aforementioned methods.

Festival Eritrea: A Time Of Unity