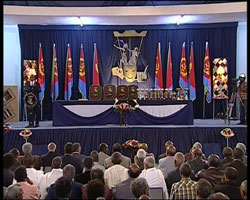 Speaking during the event, representative of the holidays’ coordination committee, Mr. Tesfay Berhe disclosed that this year’s festival alone incorporated around 290 different institutions and hosted over 800,000 people. He added that the festival clearly portrayed Eritrea’s cultures and values.

Noting that all the national events send messages of strong unity, Mr. Tesfay pointed out that such events are reminders for all the enemies that shaking Eritrea’s unity is absurd let alone imposing it on the people.

This year’s national festival gave particular attention to youth innovators and the works of inventions displayed during the days of the festival received great admiration from the visitors. Furthermore, the village of education was said to have provided conducive grounds that promote the government’s efforts in the sector.

According to reports from the expo grounds, various foreign visitors expressed their high regard concerning the security and peace the festival enjoyed as its foremost significance.

Regarding the performance awards provided during the closing event, the southern region from the zonal villages, innovation section from the village of education, as well as the Anseba region from the debating contests received first prize.

Furthermore, top 10 songs from the 290 singles and albums presented starting from June 2010 were nominated and the number one award went to artist Jemal Romodan by his song titled “Gezana”.

Secretary of the PFDJ, Mr. Alamin Mohamed Seid handed out prizes to the wining individuals, institutions and regions who won in their respective fields of performance which included quite a lot this year.