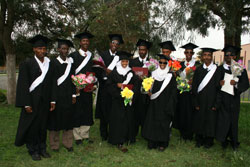 Moved last year to Adi-Keyih, the College of Arts and Social Sciences have recently graduated a total of 194 students who pursued their education in 10 fields of study. This newly established College has commenced to achieve fruits of its educational services with the first batch graduates. This year’s commencement is unique that 12 of the graduates at degree level are visually-impaired students of whom the two are females.

While functioning in Eritrea Institute of Technology, the College held three commencements for the successful completion of the courses it used to offer in five fields of study with the limited number of students that used to join.  Where as, this time, the introduction of additional departments have enabled the college to offer educational services in 10 Social Sciences fields which in turn increased the college’s capacity by two folds.

Of the 194 students, the 12 graduates of this year are former students of Abrah Bahta Elementary School for the visually impaired which is the very foundation of their today’s success.  A strong foundation the school laid has now borne fruitful outcome through the unrelenting efforts of the students. These students have decided to celebrate the commencement of their hard-won success in their former school-the Abrha  Bahta. Such an event is of its first kind in the history of the school.  The event was a reunion of the former school community and a rekindling occasion which steered nostalgic feelings among the students, the teachers and all the stuff members of the school.

Recalling the ups and downs they passed through, the very foundation the school, the Government and other concerned bodies laid towards enabling them attain such a success, the students are now looking ahead towards creating a viable learning atmosphere to other visually-impaired nationals.

Bearing in mind how these students manage to compete with their college mates and succeed in their educational pursuit; it is indeed of notable importance to recognize their hard work and determination. Owing to the provision of broader access to education, these students studied hard with utmost care overcoming any sort of challenge they encountered and become role models for people with such disabilities.
Among the 194 graduates of the college and particularly the 12 visually-impaired students is Semira Mohamed, who studied History. As regards the four years of study in the college she said that coupled with the natural barriers, the time they stayed in the college was very challenging that it required them an extra endeavor to succeed in their academic pursuit. However, she said “I really appreciate the encouragements I received from my parents, instructors, as well as my college mates who enabled me achieve this success and I congratulate them all that their efforts are paid off.”

All these visually-impaired students have surmounted the transient stumbling blocks for they envisioned ultimate success they would attain by the completion of the road they took to reach the cherished destination.
Speaking on the celebratory event in which parents of the graduates, the school stuff and invited guests took part, director of the Abrah Bahta, Mr. Tezare Aynalem said that the school planted a seedling which would have remained fragile to survive unless cultivated and due care was taken in its development stages, but this year’s first of its kind  celebration of the hard-won success of  the former students of the school is a reflection that a good harvest have been garnered through the continual efforts of those who contributed to the realization of such accomplishment.