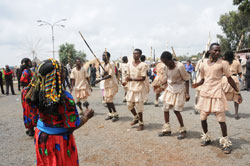 All the rituals and customs practiced by the Kunama ethnic group in setting a dispute are done by ‘Sanga Nana’ family. The family didn’t expect anything in settling the dispute but after a year of the settlement the killers family usually endow an ox to the family of ‘Sanga Nana’. The ox will be slaughtered to be eaten by the entire family of the ‘Sanga Nana’ and other members of the society.

Although every tribe has its own family of ‘Sanga Nana’, the families that settle disputes to all tribes are known as ‘Karawa’.

Another point that needs to be pointed out in settling a dispute in the Kunama ethnic group especially if the dispute involves killing is that the reward paid to the family of the deceased varies according to the gender of the deceased. Although no concrete reasons has not been know the reward paid for a female is more that a male due to the belief the society have that a girl would have born many offspring to the family.

There are also unique cases where reward is not paid, for example if a husband kills his wife he will pay reward decided by ‘Sanga Nana’ but if a wife kills her husband no reward is paid and the matter is settled saying that he  was killed by his own.

Almost every one abides to the decisions made by ‘Sanga Nana’, as a tradition no ne argues, curses or fights  within the presence of the member of the family of ‘Sanga Nana’. The society believes that if any one that refuses the settlement of ‘Sanga Nana’ and tries to attack his opponent the individual will be cursed of having a deformed hand.

If a Partner in Crime is Prosecuted, What About the Principal Swindler!?