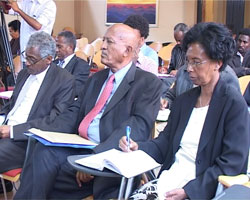 The Minister of Education, Mr. Semere Russom disclosed that a committee for national heritage has been set up and embarked its tasks to put Eritrea’s archaeological and historical heritages on the world heritage list.

Asmara, 7 August 2011 – The Minister of Education, Mr. Semere Russom disclosed that a committee for national heritage has been set up and embarked its tasks to put Eritrea’s archaeological and historical heritages on the world heritage list.

Present during a seminar held to put the ancient remains of Kohaito on the world heritage list, Mr. Semere noted that Eritrea is endowed with rich historical, cultural and natural resources. He added that Kohaito is one of the ancient historical remains in Eritrea and the move made so far which put Kohaito short listed on the world heritage list is a big step forward.

Mr. Semere also underlined the importance of public input in bringing about an institutional structure to preserve Eritrea’s cultural and historical heritages which have international significance.

Director of the national commission for the UNESCO in the Ministry of Education, Ms. Mihret Eyob on her part noted that the seminar mainly focused on assessing the ongoing activities and their achievements, to add up new findings to the documents, as well as refining the working strategies.

According to reports, research papers on the requirements on the UNESCO agreement 1972, the issue of nominating Kohaito, reviewing the administration draft, as well as the documents and evidences found to put Kohaito’s name on the world heritage list were presented.

The participants of the conference on their part recommended that the National Museum of Eritrea should carry out profound archaeological researches and upgrade the existing findings, raising public awareness in conserving ancient and historical sites, preparing maps as well as various other recommendations.

It is to be recalled that Eritrea became signatory to the world culture and nature conservation agreement in 2001 and that 12 short listed sites which met the requirements of the UNESCO world heritage list were identified in August 2005.