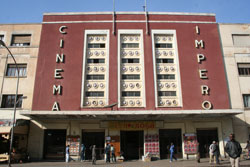 It was in the 1930s that the capital city of Eritrea, Asmara registered vigorous progress in the construction of buildings. This was also the year that a large number of Italians begun to reside in the country.  With the growing number of Italians, jobs were needed and service rendering institutions were required and this result to the construction of various buildings to facilitate services to those Italian residents of the city.  Various houses, office buildings, cinemas and restaurants begun to built in new unique architectural designs.  Despite the number of colonization in the country, those buildings are still standing in the city making it one of the beautiful cities of the world.

Cienema Impero constructed in 1937 by an Italian architecture, Mario Masina is one of those building constructed during the 1930s. This two story building can hold around 1800 audiences at a time and include a bar and offices.

Although the initial design was to build a three story building with two entrances, a restaurant, cafeteria and other service rendering plants, Cinema Impero was build as a two story building with one entrance.  The first thing that attracts any one that glanced at the building is the three long horizontal white windows. Those white windows in the reddish wall add color to the design of the building.  And to watch the inside of the cinema with all the lights lit makes the cinema look like a small city from a distance.

The cinema has got five doors and the stage is separated from the seats with standing sculptures of lions, gazelle and palm trees which were used to represent the African culture.

Cinema Roma constructed in 1937 by Roberto Capielano, originally used to be called Cinema Dakse but later changes its name to its present name- Cinema Roma. This is one of the few buildings that were renovated by the British colonizers in 1944 by Brono Selefani. The Cinema has four front doors and has four stairs at the entrance of the building. It is a two story building where the second story has four windows, which are the only windows of the building.

Those buildings are also some of the buildings that gave Asmara the nickname- second Rome.