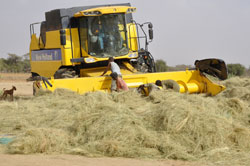 Countries in which nature benevolently endowed them in its best have not been able to make a wise use of their resources, simply due to poor management practices. Despite the large amount of water resources they possess, low inputs coupled with poor management system and dependency on charity organizations have been the main reason for the low agricultural outputs. However, amidst consistent drought hit in the Horn of Africa; Eritrea is giving utmost priority to the advancement of the Agriculture sector adhering to the principle of self-reliance. The introduction of a wide-ranging agricultural technology, the construction of a number of water reservoirs, varied agricultural researches and experiments, as well as organization of diverse trainings to farmers are making due contribution towards boosting agricultural production.

The agricultural researches and experiments that are being carried out target mainly in overcoming the challenges of farmers and thereby to bring remedial solution that could help boost agricultural productions. Research and experiment undertakings that have been conducted under the National Research Institution and Hamelemalo Agricultural College played significance importance in meeting the envisaged goal of attaining food security.
Food security could mainly be attained through the active participation and involvement of farmers and all parties whose profession is associated with agricultural activities. In light of this fact, the National Research Institution and Hamelemalo Agricultural College have regularly been inviting farmers to conduct discussions on varied agriculture related topics and share their findings of researches and experiments.

The impact of agricultural researches in boosting agricultural yield is indeed of a necessity requisite to attaining food security and particularly in countries like Eritrea that have less amount of annual rainfall range. In such cases

the country is obliged to construct water reservoirs and to judiciously utilize the availability of ground water resources through developing advanced irrigation systems.

In Eritrea, an estimated 70,000 to 120,000 hectares of land has been put under irrigational cultivation which covers 12 to 17% of the total agricultural areas that could be cultivated through such farm practice. In this regard, varied technical procedures have been applied to effectively use pressurized, drip and sprinkler irrigation, as well as surface irrigation so as to implement extensive agricultural undertakings that suit with the respective agricultural area.

Conducting researches on the availability of sufficient water and conducting experiments on a wide range of genetic resources of crops, vegetable and fruits is making due contribution to boosting production as well as ensuring  a balanced supply of agricultural  production to the market.

Enhancing local and national reserves and minimizing post harvest losses is, however, of a major concern to the sustainability of food security. Hence, the establishment of cool and ventilated storages and the trainings that have been offered to the farmers on preservation of agricultural yields would definitely solve the problems that could cause perishables productions. In line with keeping the agricultural products in a healthy state, the Hamelmalo Agricultural College have been working in identifying the priorities of small-scale and large-scale farmers and offering trainings that correspond with their capabilities and the extent of their investment.

Extensive efforts have been made to boosting agricultural harvest include: crop production activities for preservation of indigenous genetic resources, proper management of irrigation system, processing of agricultural products, conducting research and experiments to maximize yield per hectare though the provision of improved verities of selected seed and studying soil textures for their impermeability of water and mineral content. Soil and water conservation activities have been conducted on the basis of the nature of the agricultural undertakings such as irrigation based or rain-fed agricultural activity. Reserves of underground water along the river banks have been identified, terraces hav

e been constructed and seedling planting actives have been continued to redress large areas of the country to their natural state.

In spite of its limited resources, Eritrea safely sustain in the drought stricken region through the collective endeavors that have been carried out towards realizing food security. A number of professionals who have been specializing in agricultural technology would of course add momentum to the realization of food security. The ultimate goal to which Eritrea is looking for is to enhance national food reserve that could sustain the country beyond annual consumption.

A Moment With A Living Legend of Eritrean Music