A Moment With A Living Legend of Eritrean Music 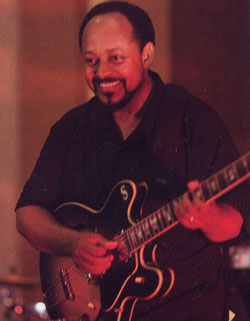 Selam Seyoum Woldemariam, founder and member of the legendary Roha Band and guitar supremo, talks about his upbringing, history and the need to rediscover the magic of good music. Experts follow:

Tell us about your background?
I was born and grew up in Addis Abeba but later on moved to Asmara due to my father’s working position. My interest in the music world begun when my grandfather with his bare-foot knowing his son’s interest , Habte’ab Woldemariam,  my uncle sold one of his oxen and bought him a musical instrument. Although my grandfather’s intention was strictly religious, I was fascinated by his decision for a very long time. As a result, I believe the love of music was instilled in the whole family. That’s when I decided to use Woldemariam as my last name and now my children use my grandfather’s name as their last name.

While I was in Addis, my father used to work in a school run by missionaries. They brought various records of spiritual songs that all students were required to sing so. Upright pianos were the main instruments. My siblings and I used to study some of the songs and sang them at the Mekane Yesus Church in Addis Abeba. We also owned an acoustic guitar at home and practically all of us tried to play it but I took it seriously the most.

From the point of music, who’s Selam Seyoum?
Four friends and I formed a Quintet choir group during the mid 60s; we became popular and pulled hundreds of followers in the church where we performed. Later, we included a Swedish drummer but it became too noisy for the elderly congregation and we had to discontinue playing. This was the time of the Beatles, Santana, Jimi Henderix, Woodstock, Watstax, Kagnew Station and other popular musical phenomena that truly inspired me. In Asmara, I used to be inspired by local musicians and bands. Tewolde Reda was one of them and we used to copy his style of playing the guitar and to this day, I am fascinated by how he was able to come up with that unique sound. One of his signature styles will be included in my upcoming instrumental CD.

Is it all about the guitar or do you play any other instruments?
I love to play all kinds of music instruments-bass guitar, drums, a little bit of piano- but I am totally devoted to my guitar. Otherwise, I would become jack of al trades, master of none. I have owned my Gibson 335 ES for 31 years now. This same guitar did almost all of the recordings in the 70s, 80s and 90s.

You were a founding member of Ibex Band- how did it all come about? And who were the members of the band and what was the musical relationship like within the band?
I was offered a contract at the Venus Club and went back to Addis Ababa. Relatively speaking, Addis night life seemed better that Asmara. After working for a year or so at the Venus, Ibex Band-I guitar player, A Zimbabwean called Andrew Wilson, asked me to replace him at the Ras Hotel. During this time, Ibex-I was dominated by two foreigners- Ismail Jingo, vocalist and percussionist and Andrew Wilson, lead guitarist. At the time, most foreigners were leaving Ethiopia and Jingo and Wilson couldn’t stay. As a result, re-forming the band in the form of Ibex-II became essential. After I joined, we decided to bring in Girma Chipssa as an English vocalist, Hailemariam Ghiorghis from BSB as a keyboard player and Ali Birra as Aderigna vocalist. Mahmoud Ahmed was already in the group. The first recording we did was Mohmoud’s Ere Mela Mela album around 1975 which was later to become the first ever CD in Ethioipian history released by good friend, Francis Falceto.

Did you guys have a recording studio?
The only studios then were that of Philips or other governments owned radio stations. When we recorded our Ibex instrumental album, we included Tekle Tesfazghi famous song Kemd’layey which opened the door for Tekle to join the band towards the end of the 70s.The album was recorded by a Swedish friend, Carl Gustav, an engineer at the voice of the Gospel studio. The all new four track mini-studio that he brought was a big deal for us. Later, most of our recordings were made either at Ras Hotel, Hilton or Ghion. Of all those places, Ghion was the most comfortable because the buildingitself was separate and we were able to use it day and night.

When Ibex band disbanded in 1979, three of the members – Giovanni Rico, Fekadu Andemeskel and yourself went on to create Roha Band – probably the single most successful band in the history of the Ethiopian music. How did the development go and how was the experience like?
Ibex was disbanded because most of its members left for the Sudan. Mahmoud also left for US. Me, Giovanni, Fekadu and by this time, Tekle and Levon Fondacci, son of one of the forty Armenian marching band members who came to Ethiopia during the 1920s, were left. We were short of a keyboard players and a drummer. Dawit Yifru joined us as a keyboard player but we were not able to find a drummer so Tekle remained as our drummer while in Hilton. The main shareholders of Roha were the six of us. Tekle passed away in the US. Now, the permanent members of the Roha are four people – two are still in Addis Abeba and the other two, including me, in the US Roha Band hasn’t yet disbanded officially.

How was it like to work with the legendary Tekle Tesfazgi?
Tekle, may he rest in peace, was an incredible human being and a super fine musician. We were able to do Tigrigna weddings because of him and he was versatile and was ready to participate in all fields. I did an instrumental in his memory while in Addis in 1994 and his songs remain sweet and live for ever.

How many albums did you guys produces as Ibex band and Roha Band?
While at the Ghion, we recorded over 250 albums. It was a revolution and Ghion was our version of Motown in a way. Motown was a studio, but at Ghion, we were able to provide space for music shop owners who in turn came with their own recording machines. All recordings were made on a single track and we will repeat a number again and again if one of us made a mistake. As Roha, we travelled to Dijbouti several times and to UAE, France, Spain, and the US. The now famous Mulatu Astatke joined in our tour to Paris and Spain.

As well as being a musician, you are also a bit of history buff. In fact, you majored in history in your first degree, how did this fit in with your music?
Giovani and I used to go to AAU even while we were performing. It was really hard for us because usually, our shows abroad and exams coincided. Sometimes, we had to withdraw and re-register at later time. Fortunately, we were able to graduate.

Your final thesis for your BA degree focused on history of music in Ethiopia? Tell us about that?
I graduated in history and I wanted to concentrate on the music history of our region, the horn of Africa. My senior essay was titled the Origin and Development of Zemenawi Music in Ethiopia, 1896-1974(1988). I’m currently trying to put together a book dealing with all aspects of my experience as a musician. In the US, to further synergies those various experiences, I graduated as Legal Assistant from Georgetown University in Washington DC in 2006 specializing in Intellectual Property Law.

You currently conducted a worldwide music tour with some legends of Eritrean music –how many countries did you guys cover?
Yes, we started a couple of years ago. Efrem Tesfayesus and I are asked by Haile Gebru to rearrange his ‘Oldies and Goodies’ which we are currently putting together on two CDs. We also strongly believed that bringing about a change to how we performed by bringing back the ‘full band’ era. While doing this, we decided to tour and promote ourselves. We also wanted to show all youngsters that we had beautiful music during the 50s, 60s, and 70s and encourage them to fuse those oldies with modern rhythms, be it Jazz, Rap, Pop or Reggae. Our first tour to Europe was in 2009/2010. We were very successful and were very much encouraged. Our tour took us to Stockholm, Gutenberg, Rotterdam, Rome, Milano and other places.

ow was the experience like?
It was not easy tour because we had to give up whatever luxury we had in order to minimize our cost. We some times stayed five to six people in a single room with a single toilet. The second tour was in 2010/2011 and this time, we expanded our tour to include Germany, Great Britain and Norway. This time also we had a blast and the result was better than the previous years. It’s interesting to note that our audiences in Europe were much relaxed and appreciated instrumental music. I wouldn’t want to pass this opportunity without thanking Haile Gebru and Habtom who sacrificed a great deal to be part of the tour. Haile’s CD – part one – will be out soon and we encourage all music lovers to buy original CDs and support this noble cause.

Do you think the revival of the full band will help take Eritrean music to the next level?
Well, I don’t mean the full-band formula in itself will bring about change- a solo acoustic guitar player or a solo piano player, a duet, trio or quartet can also deliver the needed change. Creativity will come about when only we are ready to put 100% of our effort in to the music and not let the computer do it for us. One has to be creative and use computers to further one’s creativity not enslaved by it. In other words, all
I’m saying is that, let the music be organic. Any change will take time and at this time all we need is few supporters who would act as ‘disciples of change’.

What do you do now days?
Currently, besides performing with the legends, I spend most of my time in Brooklyn, New York with Tomas Doncker band. We have a couple of projects and one has already come to fruition in the form of the already released small world part 1(deluxe edition) album. The second one will be out soon and I am working as a production consultant while also doing fusion guitar work on some of his compositions.