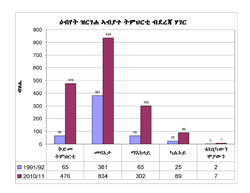 The principle the Government of Eritrea perusing   in the education sector has been giving special focus to equal distribution of educational access. Taking in to account that natural resources could only accelerate the pace of development journey; education rather plays the leading role to a sensible use of resources and thereby make due contribution to building an economically, technologically, politically and culturally strong nation and for which substantial investment has been directed to the enhancement of this sector.  The benefits of education are indeed numerous, but all of which are ingredients to establishing a nation that is known for its all-round progress to which the country is working for.

Distribution of Eritrea’s educational institutions has shown a three-fold growth as compared to the   period between1991/92 and 2010/11 academic years. Hence, the number of educational institutions which was once limited to 538 in 1991 has now grown to 1,708. Such a substantial advancement in the education sector shows the country’s engagement to totally surmounting any sort of hindrance that could make the county lag behind. Building a competitive human power and thereby creating a competitive economy mainly relay on  building a dynamic society that could cope up not only with the legible challenges but rather girded with enabling competence to deal with unforeseen barriers.

Having a closer look to the commendable advances registered in the last 20 years gives a clear picture of the broader educational access so far provided throughout the country at all levels of academic pursuit. The comprehensive growth of educational institutions in figures is as follows: Kindergarten from a total of 65 to 476, elementary from381 to 834, junior from 65 to 347, secondary from 25 to 89 and technical and vocational trainings institutions from 2 to 7.

In the early days of independence there was hardly equal distribution of educational infrastructure; this time however, a balanced provision have been secured through out the country.  “Thanks

to the equal distribution of equal educational opportunities the government pursued, the number of educational institutions have risen in folds,” said Mr. Petros Hilemariam, Director of Human Resource Department at the Ministry of Education, “parallel to such opportunities that give special focus to   the rural area of the country the total number of students intake has shown a progress form 260 to 600 thousand.”

Preliminary studies have been regularly conducted for the construction of new schools also taking in to account the class size; despite there has been gab between the enrolment rate and the desired goal. The Government has there fore been exerting extensive efforts to mitigate such shortcomings.

One may pose a question that the advances in educational access have been substantially growing and what about skilled professionals. The establishments of higher educational institutions and skill up grading courses that have been offered through open distance learning and by sending students for exchange programs have been the major actions that have been taken to the enhancement of teachers skills at all levels. In 1991, there were a total of 5,000 teachers teaching at all levels of education, where as now  parallel to the existing educational opportunity the number of teachers has also  risen to 15,000 who  are dispensed through out the country.

If not in its utmost, all advances that have been registered in the education sector are in fact very encouraging. The all-round advancement Eritrea has registered in the last 20 years is vey exemplary and a pride to the country.  “Endeavors that have been exerted to overcome challenges that would be encountered in the course of implementing development programs and ensure academic excellence have been persistently continuing with an added momentum so as to meet the desired goal.” Mr. Petros said.

New Discoveries at the Ancient Port City of Adulis