New Discoveries at the Ancient Port City of Adulis 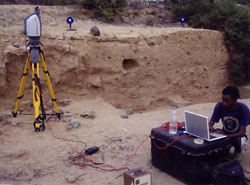 The Adulis Project – 2011
Adulis is well known as citied by various classical sources as the Periplus of the Erythrean Sea (1st c.A.D.) and the Christian Topography (6th c. A.D.) as an important port of trade in the Red Sea in Antiquity. The site was indentified for the first time by Henry Salt at the beginning of the 19th century in the Zula Bay.

The first field survey around Adulis was conducted in 1840 by Vignaud and Petit, as part of the Theophile Lefebvre mission. After 28 years, the first excavation was conducted in 1868 by British soldiers under the direction of Captain William West Goodfellow, under the auspices of the British Museum. At the end of the 19th century, the British explorers Theodore Bent produced a graphic documentation of the site. In 1906 Richard Sundstrom, a team member of the Enno Littmann, excavated a large building in the North Eastern sector of the site. After one year, in 1907 the Italian archaeologist Roberto Paribeni conducted a substantial excavation in different areas of the site. As a result, two Byzantine “churches” and the early levels of occupation of the site were identified at the South West limit. As the end of the 1960s French archaeologist, also conducted an excavation in the central sector of the site focusing on the documentation of residential areas.

All this investigations were colonial by nature and failed to follow scientific standard study, as a result, they produced biased and distorted publications which totally underestimate the culture and history of the country. Precious artefacts were found discarded on the surface and other important materials recovered from the excavation museums (Italy, England, France and Ethiopia) and are awaiting official reclamation process.

Around 2004, 2005 and 2007, a scientific archaeological survey was conducted in Adulis by the National Museum of Eritrea, University of Asmara (Department of Archaeology), Regional Museum of Northern Red Sea Region and Southampton University under the supervision of DPS Peacock and Lucy Blue. On this occasion, the site was surveyed although no archaeological excavation was conducted.

The investigation is first of its kind and has revealed promising findings. The main objectives of this season’s investigation were to conduct archaeological excavations and understand the history, the architectural phases, the spatial organization of the town , the paleoclimate and ecology of the site in order to reconstruct the history of the area and re-write an alternative history of the area and most importantly, to understand the resons for the sudden demise of the civilization. Technically, this project aims at providing the first detailed chronological sequence of the occupation and development of the site and the conservation of the exposed trenches.

The result of the stratigraphic excavation of this season revealed masonry structures of an ancient church having an area of 180 sq. meters. Various archaeological artefacts (pots, ceramics, charcoal samples, amphora, stone tools, wall structure, bones, iron materials, coins, beads …etc) were also collected from the stratigraphic excavations and survey. The architecture of the ancient church shows close similarly to the ancient church shows close similarity to the already identified churches in Metera and the Byzantine world. The design of the wall structure of the church enlightens to the locally dominated civilization in the area with trade related outside influence. This fact significantly confirms to the locally dominated establishments of the ancient port city of Adulis in particular and the civilization of the hinterland if Eritrea in general.

Even thought results of scientific carbon and ceramic seriation dating are pending, the results of ceramic typological analysis show ancient occupational levels that belong to the adulate civilization. Based on the findings from the stratigraphic excavations, the lower occupational level predates the Axumite civilization.  The discovery of the Adulite civilization will surely concern the previously known civilizations in the region and this is an incredible result in the ancient history of East Africa. More importantly, the results of this season’s excavation, survey and laboratory analyses are very important in preparing an alternative history of Eritrea and also in debunking the biased history of the country published during the colonial times.