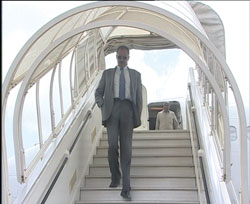 During the visit, the President held a series of talks with Ugandan leader both in Entebe and Kampala that focused on strengthening bilateral relations, especially in trade and investment, peace and stability in Africa in general and the Horn region in particular. The two leaders reached understanding on exerting joint efforts regarding regional and international issues of mutual interest.

President Isaias on his part expressed appreciation on behalf of the Eritrean people and government for the warm welcome accorded him.  He further asserted Eritrea’s readiness to exert resolute effort to develop all-round cooperation between the two countries.

Furthermore, the President conducted discussions with investors, in addition to visiting a number of Ugandan commercial institutions, during which he gave extensive briefings regarding investment opportunities and possibilities in Eritrea. The major steel works and zinc plant, Roofing Metal, is one of the Ugandan factories the President visited.

What’s more, President Isaias conducted a seminar in Kampala for Eritrean business community members, communities and youths residing in Uganda, Kenya and the Republic of South Sudan on the objective situation and business, as well as investment opportunities.

The President underlined that Eritrean nationals wherever they live hold supreme the interest of the nation and their dignity. He further pointed out that the Eritrean government is as ever giving due attention to the task of ensuring investment guarantee and related issues for Eritrean citizens living abroad.

Noting that every Eritrean nationalist is the Ambassador of his country, President Isaias reminded the nationals to work for long-term objectives be it in trade activities and other ventures.

He further underlined that the Eritrean government closely follows up current developments at the regional and international level, besides handling them accordingly. The President also called on all nationals to give a deaf ear to cheap propaganda ploys, and thus strive for the realization of the country’s long-term vision.

Moreover, he explained that the Government is engaged in vigorous endeavors to map out investment and trade guidelines that would equally benefit all citizens taking into account the objective situation in the country.
Meanwhile, the joint Eritrean-Ugandan ministerial committee held a meeting, during which they signed a document on working together in the domains of regional peace and security, international affairs, trade, investment, education, health, civil aviation and communications. A joint ministerial committee has also been formed to follow up the implementation of the accord.

In line with the accord concluded, the first meeting of the joint ministerial committee is scheduled to take place in Asmara on the first week of October 2011.