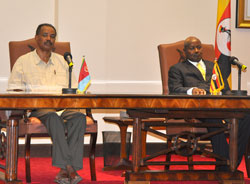 ations as regards strengthening bilateral cooperation, the leaders asserted that they would exert utmost efforts for its implementation.

The Ugandan leader said that the visit of President Isaias was not only of great significance, but also conveyed a strong message to all those who champion peace and development. “The visit provided an opportunity to those forces engaged in various acts of defamation against Eritrea out of lack of knowledge about the culture and values of the People’s Front to get correct information about Eritrea and the objective situation in the country,” President Museveni elaborated.

Likewise, President Isaias underscored Eritrea’s commitment to promote peace and security not only in the Horn of Africa, but also the continent and the world at large.  Furthermore, he indicated Eritrea’s firm stance regarding the Somalia issue, and that the goal of ensuring a united and prosperous Somali nation could only be realized through the participation of the entire Somali people. “Overlooking this basic fact and thereby getting enmeshed in various sentiments and ambition could not lead to the attainment of the desired goal,” President Isaias underlined.

Baseless allegation of famine in Eritrea only reflects day-dreaming of enemy forces and deep frustration, Say inhabitants of Elaberid sub-zone